Return of the Sparrow

Universal concern about the future of the house sparrow led NGOs, clubs, societies and universities across the world to celebrate March 20 as the World Sparrow Day.

Since 2010, the Day dedicated to the tiny bird, has become an annual event that would raise public awareness about the decline of house sparrow as well as all the common birds and biodiversity around us.

This international initiative intrigued many curious minds to study in depth what lies behind the disappearance of the winged companions that evolved with us.

The decline in the number of house sparrows is attributed to ecological disturbance coupled with ever increasing electro-magnetic radiation.

Further, destruction of their natural habitat, lack of food for the young and nesting sites and the effects of pesticides continue to threaten the sparrow.

Sparrows need a diet of pests, worms and other insects which serve as a protein supplement, particularly during growing up phase.

Extensive use of pesticides and insecticides in farms and gardens is killing the bird’s primary food source: insects, pests and worms and threatens the bird’s existence.

The shift to new lifestyles, even in rural areas, has come into conflict with the sparrow’s basic existential needs.

The mud and thatched dwellings or the wood and tin roofs gave way to high rises, the use of glass and steel in the buildings reduced the availability of nesting sites for the bird. 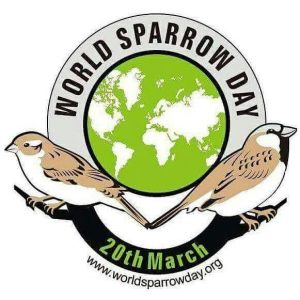 However, like most bird species, the house sparrow is highly adaptable — at least my study on the chirpy bird proved that.

This high adaptability to changing circumstances is doing the magic for the survival of sparrows—at least in this part of the world!

Since 2011, I continuously surveyed the birds in Guwahati city where I could find them in great numbers.

From these surveys what I could gather is that–it really doesn’t matter whether we put a bit of cereal, or a nesting box or even the right kind of garden hedge for their survival–the sparrow is going to stay and continue to be a ‘hanger-on of man’ as I see the bird slowly adapting to a life even inside the concrete slabs!

It is neither the mud-and-thatch dwelling, nor the match box– rather the bird has learned the art of carving out a comfortable niche in the little openings of concrete slabs!

So I see them in multi- storied buildings, commercial and official flats and even in the city’s flyovers.

I also found community roost of the bird in the residential as well as commercial hubs in the city.

In 2012, I reported of such a roost of some thousands of sparrows from the busy Guwahati-Shillong Road. I brimmed with joy when I discovered three pairs of house sparrows hanging out from their new ‘apartments’ under a flyover!

A male fluffed out his feathers as he struts about arrogantly, quite oblivious of the heavy traffic. The birds seemed to have arranged for their living comfort inside the concrete and are comfortable in their ‘new homes’ as much as the ones raising a new brood in the holes of my bedroom ceiling!

Not only the house sparrows, chirpings of the tree sparrows have become more frequent now.

In these few years I had seen numbers of roosting sites of the tree sparrow only increasing.

There are six species of sparrows found in the Indian sub-continent.

The tree sparrows seem to be in contest with the house sparrows for dominance in the urban spaces.

From the shutter holdings of grocery shops in the busy market area to the ceilings of school-buildings, the tree sparrows already outnumbered the Passer domesticus in the urban landscape of Guwahati.

Dr Hilloljyoti Singha, Pofessor in the Department of Ecology and Environment Science, Assam University and Anukul Nath, a Ph D scholar who were engaged in a transit survey of the distribution pattern of both the species found that comparing to other parts in the country, presence of both the species in large numbers in Guwahati prove that these tiny birds are now back from the brink of doom.