Informing about the impact of heavy rains on its Twitter handle, the Northeast Frontier Railway stated on Tuesday that it has been raining since Monday night in the Dooars area in West Bengal. 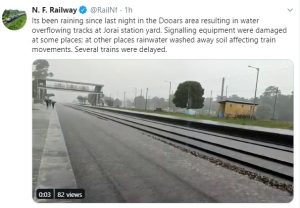 Several sections under Alipurduar have also been affected due to the heavy rains, the NFR tweeted.

The NFR tweeted: “Heavy rain submerged railway track in Jorai station in Alipurduar Division of NFR this morning. Several other sections in the division also affected due to heavy rain.”

“Many passenger trains had to be detained at various stations for safety concerns and signal failure,” it added.

The NFR has also informed that due to heavy rains, signaling equipment have also been damaged and several trains got delayed. 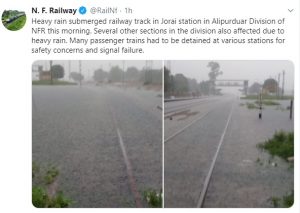 “It’s been raining since last night in the Dooars area resulting in water overflowing tracks at Jorai station yard. Signalling equipment were damaged at some places; at other places rainwater washed away soil affecting train movements,” the NFR tweeted.

“Several trains were delayed,” it added.