Migrant workers, students, pilgrims, tourists and other stranded people in different parts of the country are allowed to return home by special trains that will be run by the Indian Railways amid the nationwide lockdown.

The Union home ministry said in an order on Friday expanding the scope of an earlier order that said such transportation can happen only by buses.

The railways ministry will designate nodal officers for coordination with states and Union Territories, the home ministry order said. 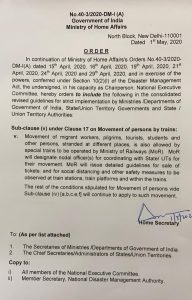 Soon after, the railways ministry released detailed guidelines on the sale of tickets, and on the social-distancing norms to be followed at stations and inside trains.

On the occasion of Labour Day (on May 1), the government has decided to run ‘Shramik Special’ trains to transport migrant workers, pilgrims, tourists, students and other persons stuck across the country due to the lockdown triggered by the coronavirus disease (Covid-19) outbreak, the railways ministry said.

“These special trains will be run from point to point on the request of both the concerned state governments (those sending and receiving the passengers) as per the standard protocols for sending and receiving such stranded persons. The Railways and State Governments shall appoint senior officials as Nodal Officers for coordination…,” the ministry said.

The first “special train” to transport migrants stranded by the lockdown left Telangana for Jharkhand at around 4:30 this morning, carrying 1,200 people from Lingampally in the southern state to Jharkhand’s Hatia district.

According to sources a second such train is scheduled to depart Kerala’s Ernakulam at 6 pm for Bhubaneshwar in Odisha, ND TV reported.

Mizoram to launch “COVID-19 No Tolerance Fortnight” from October 26