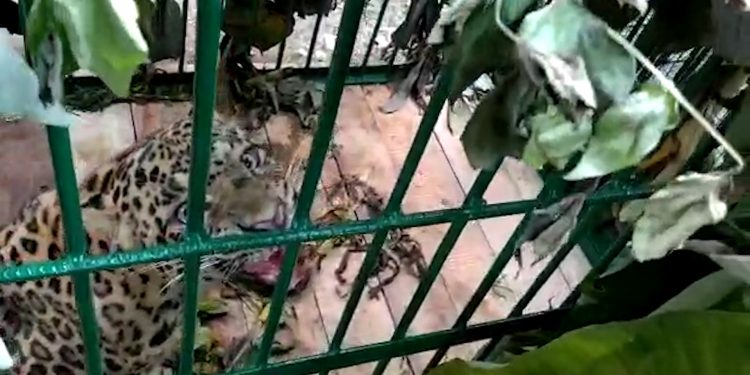 A male leopard which was on the prowl in and around the residential areas of Shantipur in Guwahati was trapped on Wednesday.

Forest officials said the male leopard, during the last couple of months, had unleashed a reign of terror in Shantipur area, and had killed several dogs, cats and goats.

Before the operation, the forest officials had studied the behavior of the leopard from a couple of CCTV footage captured in the locality.

The leopard was finally caged by forest authorities on the wee hours of Wednesday.

The forest officials had laid a trap for the leopards by tied a goat as bait in a cage.

The leopard was lured into the cage, and the forest personnel immediately managed to trap the animal.

The leopard was later taken to the Assam State Zoo. The veterinarians in the zoo are now examining the trapped animal, officials said.

People in Shantipur are happy with the capture of the leopard.

“There are some more leopards in our area, and the forest officials should try to trap those as well,” Nandan Das, a resident of PNGB Road in Shantipur, said.

Das said the leopards generally attack dogs, cats and goats. “But people are scared to venture out at night fearing attack by the leopards,” he said.