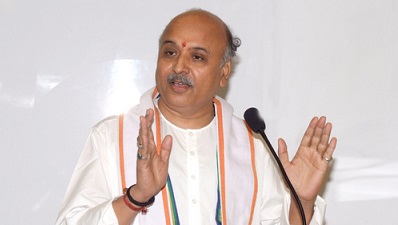 The Guwahati Police has barred former president of Viswa Hindu Parishad (VHP) and the president of newly-floated Antarashtriya Hindu Parishad (AHP), Pravin Togadia, from visiting Guwahati, the gateway to Northeast for two months keeping in view the prevailing situation of the State ahead of publication of the final draft of the National Register of Citizens (NRC) by stating that his ‘inflammatory’ speeches might create unrest in the State.

The Commissioner of Police, Guwahati, Hiren Chandra Nath on Tuesday issued a prohibitory order asking Togadia to desist from holding any press conference or attending any programme organised by Antarashtriya Hindu Parishad in the city.

Talking to Northeast Now, Nath said, “Keeping in view the prevailing situation of Assam ahead of the publication of the final draft of the National Register of Citizens (NRC), we have imposed a ban on the entry of Pravin Togadia in the city as he makes inflammatory statements. We would be compelled to impose Section 144 of the CrPC if Togadia steps into Guwahati.”

Nath further said that Togadia’s provocative statements could harm the sentiments of religious minority communities of the State which would disturb the peace and harmony of the society.

On July 15 last, Rashtriya Bajrang Dal activists burnt effigies of Assam Chief Minister Sarbananda Sonowal and Prime Minister Narendra Modi across the State in protest against the ban imposed on the entry of Pravin Togadia in the State.

The media convenor of the Assam unit of Rashtriya Bajrang Dal, Deppjyoti Das, said despite the ban imposed on Togadia, he would visit the State and attend the programme on July 18 and 19, 2018.