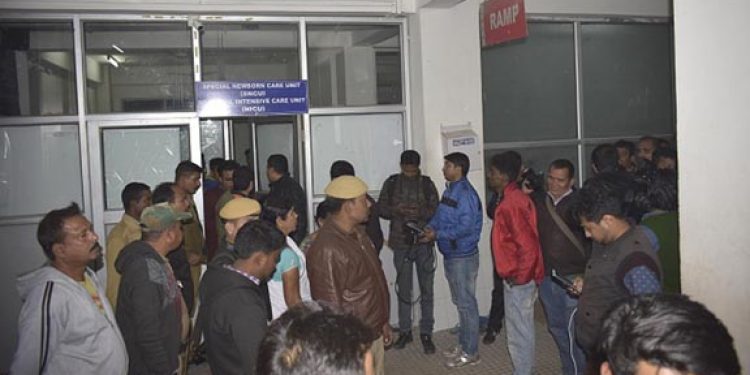 Police personnel at GMCH in Guwahati after the incident of fire on December 28, 2018. UB Photos

Following the recent incident of fire at Gauhati Medical College and Hospital (GMCH), the hospital authority has lodged an FIR.

According to media reports, the FIR has been lodged by the GMCH authority to ascertain the cause of fire.

It may be mentioned that a fire broke out at the Neonatal Intensive Care Unit (NICU) of GMCH on Friday evening.

Caught in a dark cloud of smoke triggered by the fire, 68 newborn babies were gasping for breath in the NICU of the hospital. They were later evacuated safely.

The fire allegedly broke out as a machine caught fire near the NICU.

The GMCH authority, as per reports, has lodged the FIR seeking a thorough investigation by the police so that no such incident recurs in the future.

The incident triggered panic among the parents, attendants and the hospital staff.

Some inconsolable mothers were seen crying and sobbing.

According to some parents, several babies complained of uneasiness due to smoke inhalation following the incident.

GMCH sources haf said there have been no reports of any casualty in the incident.

All the babies were quickly taken out and shifted to a nearby room of the hospital.

Doctors said all the babies were safe. Police officials present in the hospital, however, have refused to speak to reporters. Firefighters from Dispur rushed to the hospital and doused the flames.

Assam’s Minister of State for Health & Family Welfare Pijush Hazarika and then Guwahati Police Commissioner Pradip Saloi also visited the hospital to take take stock of the situation after the incident.

Minister Hazarkia said that all the babies were safe and there was no causality.