Police party on ship in Brahmaputra amid curfew & lockdown in Guwahati; probe ordered

Assam chief secretary Kumar Sanjay Krishna has taken cognisance of a news report on a night party enjoyed by Assam Police officials on a ship in river Brahmaputra in Guwahati amid lockdown and night curfew.

After publication of the news report on Assamese daily ‘Amar Asom’ on Tuesday, chief secretary Krishna issued an urgent order on the same day asking the commissioner of police, Guwahati to probe into the matter.

According to the report, the night party organised on a ship ‘T.F. Damodar’, was also attended by women police officials and some of the cops also joined the party along with their family members. 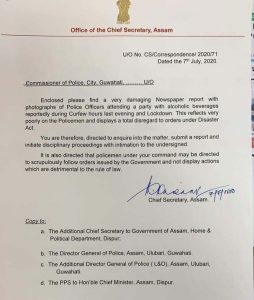 Referring to the news report, the chief secretary in the urgent order (No. CS/ Correspondence /2020 /71), issued on Tuesday, said: “Enclosed please find a very damaging newspaper report with photographs of police officers attending a party with alcoholic beverages reportedly during curfew hours last evening and Lockdown.”

The act reflects very poorly on the policemen and displays a total disregard to orders under Disaster Act,” said Krishna.

Directing the city police commissioner to inquire into the matter, Krishna asked him to submit a report and initiate disciplinary proceedings.

“It is also directed that policemen under your command may be directed to scrupulously follow orders issued by the government and not display actions which are detrimental to the rule of law,” the chief secretary said in the order.

Due to surge in COVID19 positive cases in Guwahati, the Assam government imposed lockdown from June 29 to July 12 and 12-hour night curfew from 7 PM.