People’s Action for Development (PAD), a non-governmental organisation (NGO), says only sustainable adaption to climate change in flood-affected areas of Assam can reduce the flood miseries in the state.

The flood and erosion can be considered as the worst disaster in Assam.

Innumerous tributaries of the Brahmaputra and the Barak rivers create devastating flood and erosion havocs each monsoon almost in all the districts of Assam.

But, Lakhimpur and Dhemaji districts, for their geological locations, more prone to floods and erosion.

Due to various causes, including human intervention and climatic changes, the intensity, frequency and irregularity of flood has been increasing year by year.

It has already been proven that the conventional approaches have failed in controlling floods and preventing erosion in the state.

The changes in the rainfall patterns, including erratic rainfall, heavy amount of precipitation in a single day, in these two districts and in the hills of Arunachal Pradesh resulted in catastrophic floods and in the downstream and with the course of time the geomorphology of these rivers have also been changing.

Many rivers do not have stable riverbeds and also often migrate channels.

People claim that the assessment of flood damages by the government are much lower than the real damages.

In this context, people who live in flood-prone areas must adapt to flood or they must be resilient.

Flood completely ravages the economy of the flood-affected communities; therefore, to cope up with such situation people must learn adapting skills faster.

To make people resilient and increase the adaptive capabilities, People’s Action for Development (PAD), a non- governmental organization with support from Terre des Hommes (TDH) and BMZ is implementing a project called – ‘Strengthening Resilience: Sustainable Adaption to Climate Change in Flood Affected Areas of Assam through Multi-Sectoral Prevention and Adaptation Mechanisms and Advocacy’ in 10 flood-affected villages under Bihpuria Revenue Circle of Lakhimpur district since mid-December last.

Philipson Sona, the coordinator of the project says these villages were chosen as they have been severely affected by Subansiri river’s floods. 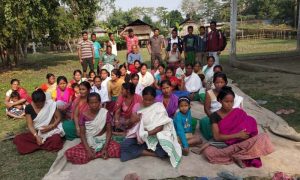 “We are trying to work with the community in phase-wise to increase adaptability and make them resilient to floods.”

“Only a better economy can increase peace and tranquility in any place of the earth,” he adds.

He also named the villages where the project work has been going on.