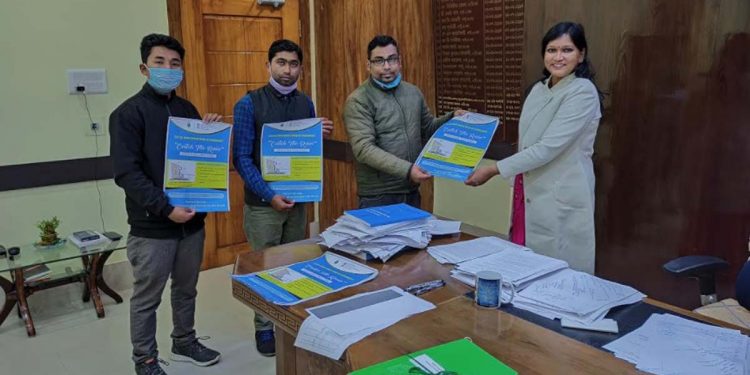 A view of the launching event.

Somnath Paul, the district youth coordinator of the Nehru Yuva Kendra Sangthan (NYKS) along with the youth volunteers, was present on the occasion.

National Water Mission’s (NWM) campaign ‘Catch the Rain’ with the tagline ‘Catch the rain, where it falls, when it falls” is to nudge the states and stake-holders to create appropriate Rain Water Harvesting Structures (RWHS) suitable to the climatic conditions and sub-soil strata before monsoon.

Under this campaign, drives to make check dams, water harvesting pits, rooftop RWHS, etc.; removal of encroachments and de-silting of tanks to increase their storage capacity and removal of obstructions in the channels which bring water to them from the catchment areas, etc. will be taken up.

Besides, repairs to step-wells and using defunct bore-wells and unused wells to put water back to aquifers, etc. are also be taken up with the active participation of the people.

Under the ‘Catch the Rain’ initiative, all water bodies in the districts are to be enumerated, (checked with revenue records) and encroachments to be removed.

The union government has involved NYKS for undertaking ‘Catch the Rain’ awareness campaign to cover 623 districts throughout the nation.

The awareness generation phase of campaign will run from mid-December 2020 to March 2021.

Demonstration activities like theme-based street plays and skits, branding and popularize the campaign by logos and printed IEC materials will also be carried out.