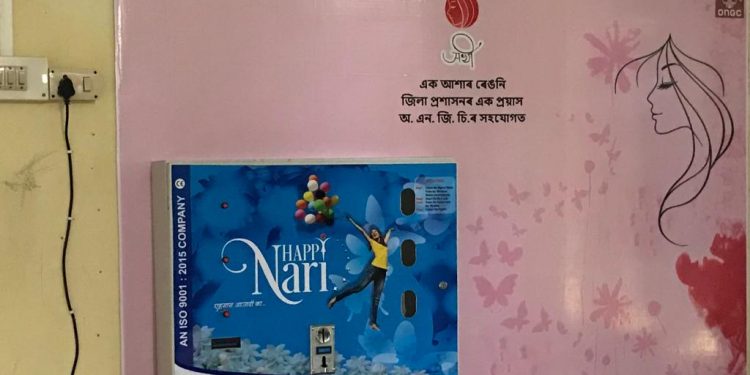 ONGC in association with Sivasagar district administration of eastern Assam installed sanitary napkin vending machines with incinerators at 18 girls schools of the district.

The napkins are charged very nominally when compared to the commercially available ones.

Coupled with machines, a periodic awareness talks are also held in the school by the health educators.

The initiative was aimed at providing easily accessible sanitary napkins at affordable cost, as a measure to overcome medical and social taboos associated with feminine personal hygiene.

“I was very eager to know about the reproduction process in class 8th last year. But due to my menstrual needs I could not attend that important chapter,” rued Kashmiri Khanikar, of Bolomia Gaon of Phulpanichiga, studying in class IX in Jhanji high school in Amguri of Sivasagar district.

“However, I learnt about it indirectly,” she added.

Laky Mech, 8th class pupil, daughter of a farmer of Gorali Gaon of Nazira division, is a keen badminton player of Nazira High school, too had to forgo important coaching class due a similar experience a year before.

Like Kashmiri and Laky, there were 7000 girls studying in 18 schools of Sivasagar, were experiencing such problems albeit silently a year before.

Adolescent girls studying in schools are forced to abstain themselves from the school when they need to attend to their menstrual needs every month.

Around 70 per cent of the girl pupils report to miss 1-3 days of school per month, which translates to a loss of 8 to 24 school days per year, observes senior school teachers.

Added to that, they are cowed down by the taboo and shame attached to it by rituals and unscientific reasoning.

The menstrual needs are laced with mental, emotional and physical trauma, which affects the day-to-day lives of the girls, points out Dipti Gayan, headmistress of Jhanji Girls High School, Amguri.

Now, Kashmiri and Laky cycle to school without any qualms about personal hygiene.

With glitter in their eyes, they said in a confident tone that their friends who go to private schools are demanding vending machines with incinerators.

Dipti Gayan, headmistress of the Jhanji School says after the installation of the vending machine, girls have stopped taking half-day leaves on account of personal hygiene.

The machine has not only uplifted the confidence of girl students but also helped them keep themselves healthy.

“We have 455 girl students and majority of them are regular in class,” adds Samrjit Saikia, principal of Nazira High School.

Swetangana Bhuyan, Divisional WASH Consultant (Water, Sanitation and Hygiene), UNICEF, Assam working intensely on menstrual hygiene in the region says that there is a significant improvement amongst the health of the adolescent school going girls.

It is not an exaggeration to say that such initiative is a first of its kind in entire Northeast.

Encouraged by the response from the adolescent school going girls the project, ONGC is rolling out the initiative in 50 schools of Charaideo and Dibrugarh Districts shortly.

It will address the needs of 15,000 girls and end stigma and absenteeism.