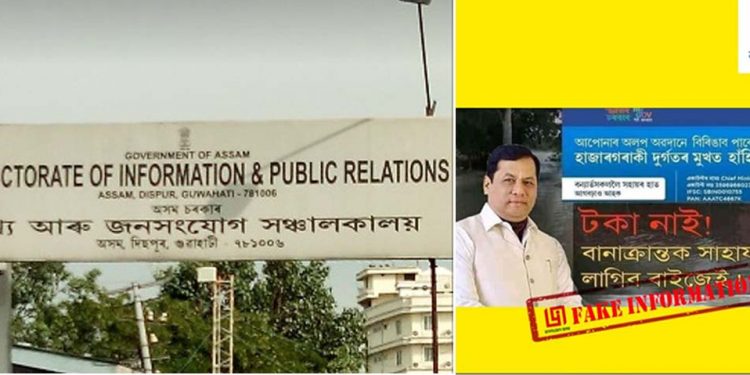 Northeast Now has lodged a complaint with Assam chief secretary Kumar Sanjay Krishna against wrong detection of a FAKE NEWS by the DIPR, Assam.

The complaint has been lodged after a news report, published by Northeast Now (Assamese) on July 15, 2019, was declared ‘Fake’ by the DIPR, Assam on July 19, 2020, after the one-year-old news was uploaded by some facebook user in a post recently.

The DIPR-Assam not only identified the news report as FAKE but also publicised it on social media platforms.

“The case of FAKE NEWS detection of the news report has come as a surprise to us as Northeast Now have been aggressively campaigning against FAKE NEWS, especially on digital platforms for the last three years,” Anirban Roy, Editor-in-Chief of Northeast Now, said in the complaint.

“Our entire team is skilled to fact-check (trained by Google News Initiative), and we use some of world’s best Artificial Intelligence tools to scrutinise every information/news articles that we upload on our three news platforms,” Roy added.

The news was prepared based on a press release issued by DIPR-Assam on July 14, 2019, and on an appeal from the Assam Government on its official Twitter handle at 12.02 pm of July 14, 2019 seeking donation.

Northeast Now apprised the director of DIPR-Assam, Anupam Choudhury, of the wrong detection of the ‘FAKE NEWS’ by his team.

But, he refused to withdraw or delete the alert from the social media platforms.

“The DIPR-Assam’s FAKE NEWS alert and subsequent publicity on social media platforms has defamed the brand image of Northeast Now,” Editor-in-Chief Roy said in the complaint.

Northeast Now is the largest digital news project in Eastern India with over 6.2 million unique users and 2.2 crore page-views every month.

While Prime Minister Narendra Modi is trying to promote the Digital India Mission, and talks about hand-holding of digital start-up companies, it is really unfortunate that DIPR-Assam is all out to “link” East India’s largest digital news project with FAKE NEWS, Roy added.

Northeast Now has urged the state chief secretary to initiate immediate action and direct the DIPR-Assam to issue a clarification to ensure that the organisation is no way involved in FAKE NEWS dissemination.