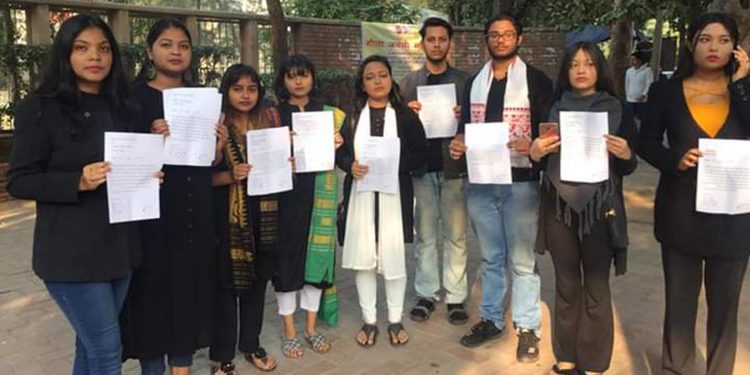 The ABVP executive members who have left the organisation. Image credit - Twitter

Twelve executive members of Delhi University North East Cell of the ABVP resigned on Sunday from the students’ wing of the RSS protesting against the Citizenship Amendment Bill, 2019.

The students from the Northeast, who have quit Akhil Bharatiya Vidyarthi Parishad (ABVP), have been pursuing higher studies in Delhi University.

They joined the Northeast unit of the right-wing students’ body in Delhi University, which was formed with 17 members.

All were office-bearers of the organization.

The decision of the students from Assam came a day after a group of ABVP members took out a rally in Guwahati in support of the Citizenship Amendment Bill.

The stir against the bill has gained momentum in Assam and many other parts of the Northeast as union home minister Amit Shah is all set to introduce it in Lok Sabha on Monday.

The bandh will be observed from 5 am to 4 pm on Tuesday, the NESO said.

The Manipur People Against Citizenship Amendment Bill (MANPAC) organisation will launch a three-day protest from Monday in Manipur against the bill.

Meanwhile, the Joint Movement against Citizenship Amendment Bill (JMCAB) on Saturday announced an indefinite Tripura bandh from December 9 against CAB.

The JMCAB is an umbrella organisation of tribal parties and indigenous social organisations, which was floated to oppose the CAB.

A media report quoted Sheikh Raisha Tabassum, who was the general secretary of the ABVP Northeast Cell of Delhi Pradesh, said, “When the Assam unit of the ABVP took out a rally in support of the Citizenship Amendment Bill, we felt humiliated. We can’t even express to what extent we felt the humiliation. Therefore, after having a word with our High Command, we decided to quit as a mark to protest the CAB.”

Tabassum said they “cannot support the CAB” for the betterment of Assam.

Following the resignation of the 12 members, the Northeast cell of the organisation in Delhi University has been left with only 5 members.