No Indians will be excluded from NRC, says Union Home Minister 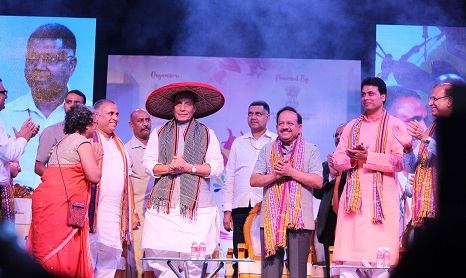 Union Home Minister along with others at Nest. FEST 2018 in New Delhi on Saturday. Image - Northeast Now

Union Home Minister Rajnath Singh on Saturday reiterated that no Indian national would be excluded from the National Register of Citizens (NRC).

Amid a much-hyped curiosity over the NRC issue, Singh said, “I want to say that no genuine Indian will be excluded from the NRC.”

The Union Home Minister was speaking at the Northeast Students’ Festival in New Delhi. The festival was organsied by ‘My Home India’, an NGO.

Singh said the NRC was necessary to identify Indian citizens and weed out illegal immigrants.

“It is absolutely necessary to know who are Indians and who are foreigners,” said Singh as he asserted that the update of the NRC was carried out under the direct supervision of the Supreme Court.

Singh further said that Northeast is the heart of India and without its development the all-round development of India is not possible.

Singh said that under the leadership of Prime Minister Narendra Modi, Act East Policy has prioritized for the development of the eight Northeastern States.

Mentioning names of sports persons like Hima Das, Dipa Karmakar and few others, the Union Home Minister said that the northeastern region is full of multi-talents and which need to be explored.

Thousands of students participated in the colorful musical cultural programme – Nest. FEST 2018 that was organized coinciding the festival.