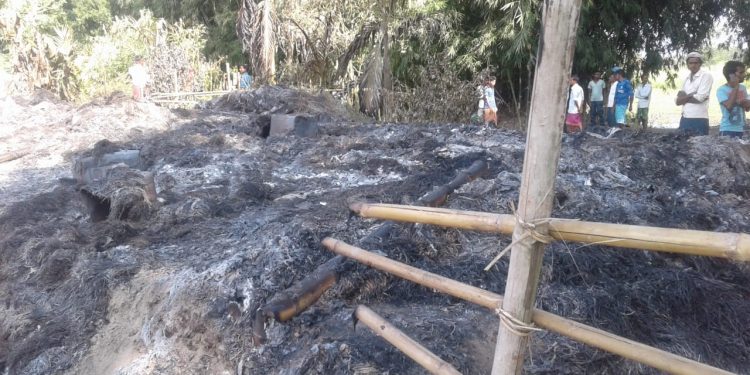 The miscreants also torched ten houses in the area.

Even though police claimed to have intensified operations to arrest the accused in the murderous attack on milkmen at Charkholia Chapori in upper Assam’s Dibrugarh district, no one was arrested till Monday evening.

A milkman was killed and several others injured when members Takam Mising Porin Kebang (TMPK) allegedly attacked the milkmen on Saturday, after they failed to pay the money demanded for celebrating its foundation day.

More than a hundred members of the TMPK armed with spears, clubs and machetes allegedly attacked the milkmen leaving one person dead and several injured.

The people who are mostly Hindi speaking migrated from Bihar and Uttar Pradesh to settle in the chapori.

The miscreants also torched ten houses in the area.

The deceased was identified as Murali Yadav, 55.

TMPK Laimekuri unit in Dhemaji district had demanded hefty donations from them ranging from Rs 10,000 to Rs 50,000 from each of the families for celebration of TMPK’s 48th foundation day scheduled on October 16.

When the families who belong to the Bhojpuri community expressed their inability to pay such hefty amount, they left with threats and intimidation.

In view of the threat, members of the community had also approached the Dibrugarh deputy commissioner (DC) and SP seeking protection, four days before the incident.

Locals, however, alleged that no preventive measures were taken by the administration.

“If the police had taken steps, this incident could have been prevented. We submitted a memorandum to DC Pallav Gopal Jha and Dibrugarh SP Gautam Borah about the matter but they have not taken any step. There is no security of our people. After the incident many panicked people have left their homes,” said Pradip Yadav, a resident of the Chapori.

“Police have not taken the matter seriously. We are poor farmers, how can we pay them such a huge amount which they have demanded,” Yadav said.

Dibrugarh additional SP (Headquarters) Dhruba Bora said around ten miscreants have been identified and efforts are on to nab them.

“We have identified around 10 miscreants and action will be taken against them as per law. The accused persons are absconding but our operation is on to arrest them.

“The situation in the area is under control now and one fixed picket of armed forces has been set up there. Regarding the involvement of TMPK members in the incident, we will be able to say only after investigation,” he said.

Meanwhile, local MP and union minister of state for food processing and industries Rameswar Teli has announced that an ex-gratia of Rs 5 lakh will be paid to the family of Murali Yadav, who was killed in the attack.