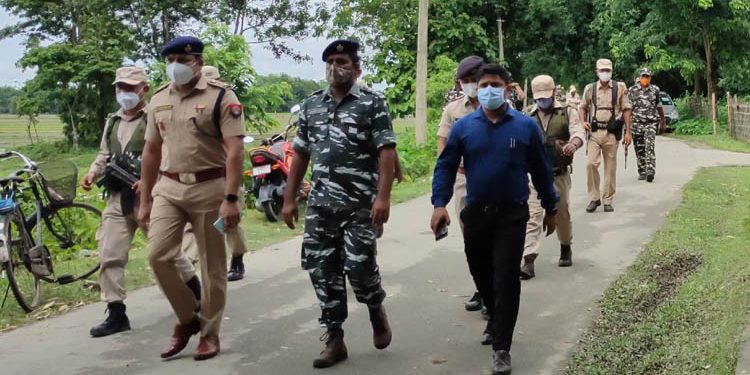 Strong vigil in Bokakhat by Assam police and CRPF personnel.

In Bokakhat, Patowary conducted a review meeting on the Covid19 situation in the sub-division of Golaghat district.

In the meeting, Patowary directed the police to conduct flag march along with CRPF personnel.

As ordered by the minister, the police along with CRPF personnel with immediate effect strengthened vigil in the area under the leadership of the district superintendent of police.

A team of police and CRPF personnel was seen moving in the streets of Bokakhat and the town.

Patowary told the media at Bokakhat that the police and CRPF would conduct flag march in the area. But by a section of media wrongly published the news that “the Army will conduct flag march from today” which created sensation across the state.

Patowary also tokk stock of the health condition of the Covid19 patients, who are undergoing treatment in Bokakhat sub-divisional civil hospital.

In order to contain the spread of Covid19, he directed the administration to carry out massive Covid19 tests and vaccination.

Patowary announced that 10 ambulances would be provided to Golaghat district and proper steps would be taken to supply sufficient oxygen.

He also asked the health department of Golaghat district to remain alert about Japanese Encephalitis and malaria.