The Rs 693.97 crore park will provide direct air, road, rail and waterways connectivity to the people.

The park will be developed under the Bharatmala Pariyojana of the central government.

The virtual event was also attended by Union ministers of state Dr Jitendra Singh, Gen (Retd) VK Singh and Rameshwar Teli; ministers from Assam, MPs, MLAs and senior officers from the Centre and the state.

#Northeast achieves another first of it's kind landmark in India. https://t.co/Qwm2rfIRcH

Speaking on the occasion, Union minister for road transport, highways and MSMEs, Gadkari said his ministry envisages developing 35 multi-modal logistic parks (MMLPs) in the country, of which work on preparing DPR and feasibility report is underway.

He said, “SPVs will be formed for all these MMLPs, and professionally qualified CEOs will be appointed for each separately. The first such MMLP is being made by NHIDCL in Jogighopa of Assam, which will be connected to road, rail, air and waterways.” 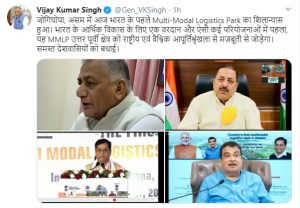 “This is being developed in 317-acre land along the Brahmaputra,” Gadkari said, adding, “The first phase of construction is scheduled to be completed by 2023.”

He informed that works worth Rs 280 crore have already been awarded, including Rs 171 crore for road construction, Rs 87 crore for erecting the structure, and Rs 23 crore for rail lines.

The work will begin next month, he said.

The minister expressed hope that this project will provide direct or indirect employment to nearly 20 lakh youth in the state.

The minister added that the distance of 154 km between Jogighopa and Guwahati will be covered by making a 4-lane road on this stretch.

He further informed that a 3-km rail line will connect Jogighopa station to the MMLP while another 3-km rail link will connect it to the IWT, and the road to newly developed Rupsi airport will be upgraded to 4-lanes for easier connectivity.

India's first Multi-Modal Logistics Park was inaugurated today. A great economic enabler, the MMLP in Jhogighopa, Assam, is the first of many more to come and will strongly integrate NER with the national and global supply chain.#AtmaNirbharBharat #GenerallySaying pic.twitter.com/jmbEUh5eZI