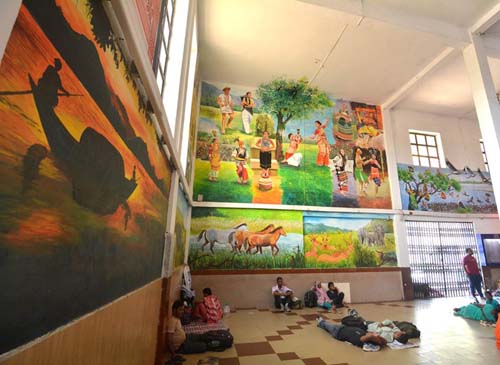 The Northeast Frontier Railways has undertaken a project to beautify Guwahati railway station to depict northeast’s culture and heritage.

They have asked award-winning art director Nuruddin Ahmed to give a facelift to the station with paintings, murals and dioramas depicting local culture and heritage.

“We have started working on the project and set a target to complete it before Durga Puja. We will try to represent the cultural way of life of not only various communities in Assam but also of the entire Northeast.” Said Ahmed, a Sangeet Natak Akademi on Sunday.

He said there will be 14 models showing handloom and textiles, wildlife, dance forms like Bihu , jhumur and bagrumba and traditional attire and musical instruments of the region, to give a new look to the railway station.

“There will be murals depicting daily village life, fishing, farming and festivals of Assam as well as other northeastern states,” said Ahmed.

The total cost of the project will be between Rs 25 lakh and Rs 30 lakh, he said.

The dioramas and murals on the walls will also give passengers an insight into the culture and traditions of different communities of the region, reports The Telegraph.

Guwahati railway station is the biggest in the Northeast and receives a footfall of over 40,000 passengers every day which makes it one of the best places to depict the cultural diversity of northeast.