NEDA partners have no moral right to remain with BJP: Congress 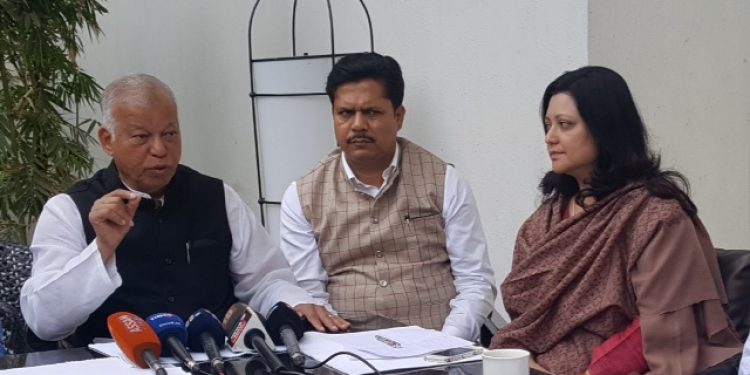 Addressing a press conference here, Faleirio questioned the other NEDA members like Meghalaya chief minister Conrad Sangma how can he still remain a part of the BJP after party president Amit Shah’s open support to the Citizenship (Amendment) Bill?

“Isn’t it a deliberate punch on the face of Mr Sangma? Does he not have any self respect? Is he then a part of the conspiracy to support the Bill clandestinely and show outside that he is opposing it?” he questioned.

Faleirio questioned the moral right of all the other NEDA member parties who are still with NEDA even after Amit Shah’s statement of swearing by the Citizenship Bill.

The AICC leader said these NEDA members cannot fool the people of Northeast with their opportunist politics.

“If they have any values left and if they are truly concerned about the cause of the people of Northeast, the NEDA members would have resigned the very day Amit Shah announced that the BJP will bring back the Bill if voted to power in 2019,” said Faleirio.

Faleiro, who is Congress party in charge of Meghalaya, Tripura, Arunachal Pradesh and Mizoram, said that they as per directive of party president Rahul Gandhi took up the cause of stalling the controversial Citizenship (Amendment) Bill in the Rajya Sabha.

Faleirio slammed the ‘arrogance of the BJP president Amit Shah’, who is also the chairman of NEDA, and said that the agenda of the RSS and BJP is to impose its will on the people of Northeast even when it goes against their interests and welfare.

“The people of Northeast cherish certain values which are intrinsic to their culture, identity and tradition and the Congress party understands and respects these values and will leave no stone unturned to protect them,” he said.

Faleirio alleged that BJP president Shah despite the popular sentiment against the Bill in Northeast and even after it was stalled from being tabled in Rajya Sabha, announced in a meeting in Lakhimpur that they will bring the Bill if voted to power in 2019 Lok Sabha elections.