80 cadets including 10 girls and 70 boys will take part in the expedition and on rotation, at a time 24 cadets will be sailing the three boats which will be used in it 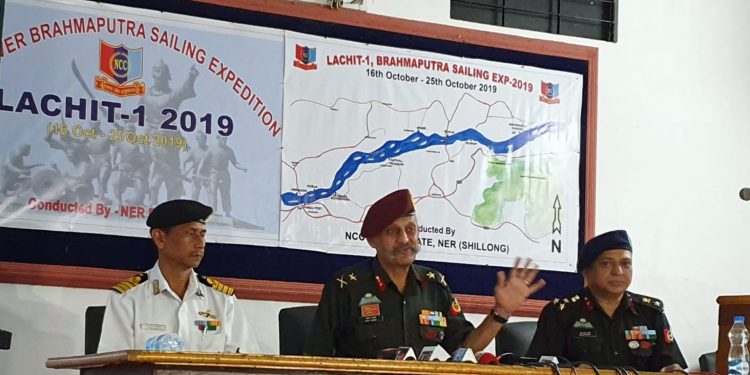 For the first time ever a sailing expedition will be carried out on the Brahmaputra river from October 16 to October 25.

The 10-day expedition will be flagged off by ADG NCC Northeast Region Major General Bipin Bakshi at Biswanath Ghat and it will culminate at Pandu.

The expedition will be flagged down by Assam Chief Minister Sarbananda Sonowal.

Bishwanath Ghat and Pandu have a special mention in Assam’s history.

Bishwanath ghat was an important naval position of the Ahom Kingdom.

Pandu was the place where the famous Battle of Saraighat was fought between the Ahoms and the Mughals in 1671.

The 220-kilometre expedition has been named as Lachit-1 after the great Ahom general Lachit Borphukan, who fought against the Mughals in the Battle of Saraighat.

Major General Bipin Bakshi, Additional Director General of NCC, Northeast Region said this expedition not only involves an adrenaline rush, but also a lot of challenges.

“We are going into uncharted waters, the Brahmaputra is as much a challenge as mighty it is,” Major General Bakshi added.

He further said that the expedition will revisit the Battle of Saraighat.

“The Battle of Saraighat is the only battle in the Indian history which was fought entirely on water,” he further said.

80 cadets including 10 girls and 70 boys will take part in the expedition and on rotation, at a time 24 cadets will be sailing the three boats which will be used in it.

“Keeping in view the challenges involved and the safety measures, the teams will only sail during the day with a night halt in various places,” informed Major General Bakshi.

“I am stressing more on safety since this is the first time,” he added.

The expedition will also carry messages on environmental hazards and climate change.