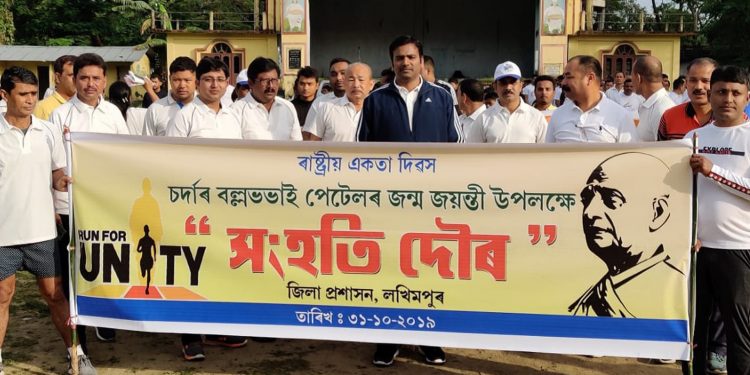 Along with rest of the country, National Unity Day – Rashtriya Ekta Diwas – was observed in Lakhimpur on Thursday on the occasion of the 144th birth anniversary of Sardar Vallabhbhai Patel.

Since 2014, October 31st is observed as the National Unity Day.

People from all walks of life too part in the ‘Run For Unity’ on Thursday.

Organized by Lakhimpur district administration, the run was flagged off by Deputy Commissioner Jeevan V from Tyagkshetra in North Lakhimpur at 7 am.

The DC, along with other dignitaries present, paid floral tributes to India’s first home minister on his birth anniversary.

In his address, the Dc spoke about the spirit of unity among all sections of the society and thanked everyone for participating in the run for the same objective. An oath-taking ceremony was also held at the venue, which was conducted by ADC Utpal Borah.

The Lakhimpur DC led the Run for Unity and completed its full course across the town.