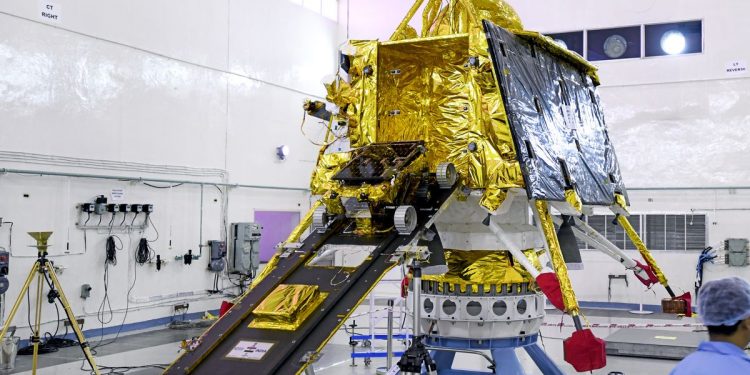 India’s Vikram lander, with it the Pragyan rover, before launch. Image credit: The Verge

The lander separated from the orbiter at 1.15 pm on Monday.

“The Vikram Lander is currently located in an orbit of 119 km x 127 km. The Chandrayaan-2 Orbiter continues to orbit the Moon in its existing orbit,” the tweet added.

“The health of the Orbiter and Lander is being monitored from the Mission Operations Complex (MOX) at ISRO Telemetry, Tracking and Command Network (ISTRAC) in Bengaluru with support from Indian Deep Space Network (IDSN) antennas at Bylalu, near Bengaluru. All the systems of Chandrayaan-2 Orbiter and Lander are healthy,” it added.

Chandrayaan 2 is scheduled to touch down the lunar surface on September 7.

Among those responsible for Chandrayaan-2 successful launch, the role of three scientists from Assam- JN Goswami, Dipak Kumar Das and Hidam Rajeev Singh.

Astrophysicist JN Goswami is the chairman of the advisory board for Chandrayaan-2 mission.