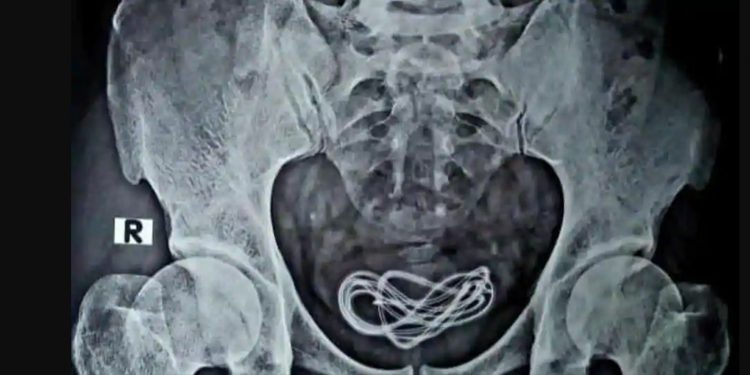 An X-ray of a 30-year-old man’s abdomen shows the mobile charger cable. A doctor performed a surgery to remove the mobile phone charger cable inside his urinary bladder. Image credit: Hindustan Times

The discovery of a mobile phone charger cable from the urinary bladder of a patient in Assam has left the doctors performing the surgery baffled.

As per reports, the 30-year-old patient had complained of severe abdomen pain and said he had ingested the charger cable.

However, on the operation table, it was revealed that the cable had been inserted through his penile urethra.

“The patient came to us with severe abdomen pain and told us that he consumed a headphone cable by mistake,” Hindustan Times reported quoting surgeon Dr Walliul Islam.

“We examined his stool and conducted an endoscopy as well but couldn’t find the cable. When we operated him, there was nothing in his gastrointestinal tract,” the report added.

However, during an X-ray of the patient, it was revealed that the cable was in his urinary bladder.

The doctors successfully removed the cable and the patient was recovering well.

Dr Islam, who has been conducting surgeries for over 25 years now, said, “The patient had inserted the mobile charger cable through his penis.”

Dr Islam further said that the patient has a habit of inserting stuff through his penis for getting sexual pleasure and on this particular occasion things went “out of control” and the cable reached his urinary bladder.

Dr Islam further said the patient indulged in the act only for sexual pleasure and that he is mentally absolutely stable and has no mental disorder.