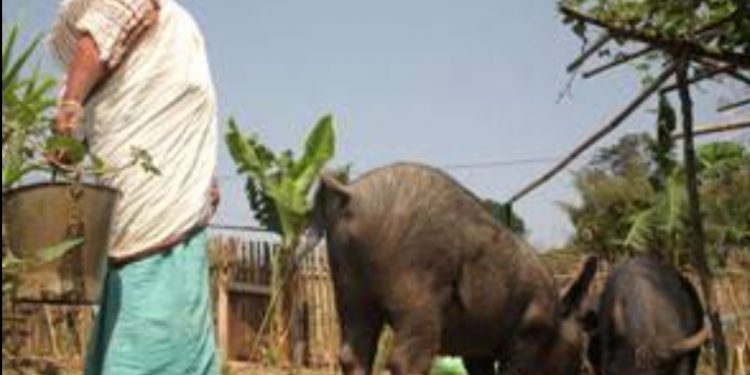 Paranoid with Assam’s decision to introduce new cattle ‘preservation’ laws, traders in Meghalaya have started to ‘illegally procure’ a large number of pigs to meet the demand for meat in the Christian-majority state.

Assam chief minister Himanta Biswa Sarma on Monday tabled a bill — the Assam Cattle Preservation Bill, 2021, on the first day of the Budget Session of the Assam Legislative Assembly.

The new legislation aims to ban inter-state transportation of cows through Assam to ‘control’ smuggling to Bangladesh.

As Assam is the gateway to the northeast region, other states like Meghalaya, Nagaland and Mizoram use Assam as a ‘corridor’ to procure cattle from mainland India.

Cows are in high demand in Meghalaya, Nagaland and Mizoram for consumption.

In addition to transporting cattle through Assam from mainland states, traders from the three Christian-majority states also buy a large number of cows from different markets in Assam for consumption.

Since the tribal population in Meghalaya is beef-eating, the traders are worried that the new legislation in Assam may jeopardize the market.

Meghalaya chief minister Conrad Sangma is already worried about the new cow protection legislation in Assam, and said his government would take up the issue with New Delhi if the new law affects the supply of beef to the state.

Eyeing pork as the alternative to beef, the Meghalaya traders are now ‘illegally procuring’ pigs from Assam.

Pigs are being ‘illegally procured’ through Boko-Riangdo (Boko is in Kamrup Rural district in Assam) and through Agia-Chibinang (Agia is in Goalpara district of Assam).

Because of the ongoing African Swine Fever (ASF) pandemic in Northeast India, bringing in pigs to Meghalaya is highly restricted.

GHP Raju, principal secretary of Meghalaya’s Animal Husbandry and Veterinary Department, told Northeast Now that he has instructed the district veterinary officer of West Khasi Hills district to look into it.

Illegal transportation of pigs to Meghalaya is a matter of serious concern as it could trigger the outbreak of ASF in the state.

Since last year, the states of Arunachal Pradesh, Assam and Mizoram have been badly affected by ASF, which led to deaths of nearly 1,00,000 pigs.

Meghalaya has already been affected by African Swine Fever outbreak in May this year, killing 320 pigs. Between May and November 2020, 541 pigs died of the highly virulent viral disease.

ASF is said to have entered Arunachal Pradesh from Tibet in 2020, spreading to Assam, Mizoram and Meghalaya.