Ngaitlang Dhar, who is the elder brother of Meghalaya Industries Minister Sniawbhalng Dhar, is keen to take over Meghalaya Infratech Limited 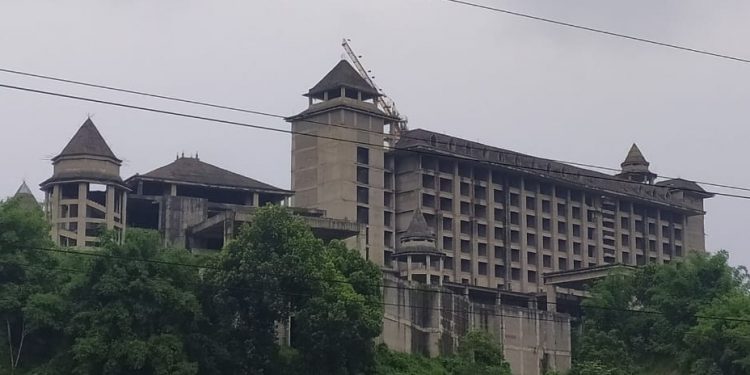 Meghalaya Infratech Limited was incorporated in June 2007 with the objective to build luxury hotels, restaurants, amusement parks and townships.

A contractor-turned Meghalaya politician is all out to buy a luxury hotel near Guwahati, which is entangled in legal intricacies and that too, at an ‘unthinkably cheap’ price.

Former legislator of Umroi constituency, Ngaitlang Dhar, who is the elder brother of Meghalaya Industries Minister Sniawbhalng Dhar, is keen to take over Meghalaya Infratech Limited, which has been constructing a luxury hotel at Khanapara.

The Meghalaya Infratech Limited was incorporated in June 2007 with the objective to build luxury hotels, restaurants, amusement parks and townships.

The company owns prime land near Khanapara Flyover in Guwahati, measuring 9.88 acres, and had started construction of the luxury hotel with 190 rooms, two banquet halls and a basement.

Almost 90 percent of the construction of the hotel, with a built-up area of around 4,50,000 square feet is complete, and the Meghalaya Infratech Limited had tied up with Marriot Hotels India Ltd for the JW Marriott brand.

Caught in a financial crisis, Meghalaya Infratech Limited could not complete the construction of the luxury hotel. It also could not repay the loan amount of Rs 248.02 crore.

Tagging the loan account as Non-Performing Asset (NPA), Allahabad Bank had initiated an application under Section 7 of the Insolvency and Bankruptcy Code, 2016, against Meghalaya Infratech Limited, the debtor.

Responding to the notice inviting Expression of Interest (EOI), published in a local newspaper in Meghalaya, there were only four applicants – Ngaitlang Dhar, Ashish Jasrasaria, Abhishek Agarwal and M.P Jain.

The Guwahati Bench of National Company Law Tribunal (NCLT), on May 20, last year, had disposed of the application after the Committee of Creditors (CoC) had approved the Resolution Plan of Ngaitlang Dhar, the highest bidder.

Amit Pareek, the Resolution Professional, appointed under section 22(3)(a) of the Insolvency and Bankruptcy Code, 2016, had submitted that the Resolution Plan of Ngaitlang Dhar was Rs 64.30 crore.

Interestingly, Allahabad Bank and Corporation Bank, which were the Financial Creditor of the project, was ready for a 51.44 percent ‘hair-cut’, and the Committee of Creditors (CoC) was ready to approve Dhar’s Resolution Plan of Rs 64.30 crore.

It is apparent that while setting the size of ‘haircut’, the value of the asset of Meghalaya Infratech Limited was kept astoundingly stumpy.

A conservative value of the 9.88 acres of prime land at Khanapara and  4,50,000 square feet constructed with 190 rooms, two banquet halls and a basement should have been at least Rs 300 to 350 crore.

During the last few months, economists have been critical of the ridiculous ‘hair-cut’ by the public-sector banks in India. Fingers are now also being pointed at NCLT for the mess.

But, the Guwahati Bench of NCLT approving the Rs 64.30 crore Resolution Plan of Ngaitlang Dhar, is definitely not the end of the story.

Not happy with the adjudication by the Guwahati Bench of NCLT, one of the resolution applicants – Panna Pragati Infrastructure Private Limited has filed appeals at the National Company Law Appellate Tribunal (NCLAT).

Panna Pragati Infrastructure Private Limited alleged that the Committee of Creditors (CoC) did not grant 1-2 extra days to submit a revised Resolution Plan, while Ngaitlang Dhar was allowed to revise the plan – Rs 63 to Rs 64.30 crore.

Ngaitlang Dhar suffered a major setback when the NCLAT, on October 19, last year, allowed the appeals, and set aside the earlier orders, observing that it suffered from “grave legal infirmity besides involving factual frailty.”

The NCLAT also ordered the Corporate Insolvency Resolution Process (CIRP) to resume from the stage of consideration of the Resolution Plan.

Subsequently, the matter has now gone to the Supreme Court, and on November 20, 2020, the apex court ordered status quo till further orders.

As the matter is now pending before the Supreme Court, Ngaitlang Dhar, according to reports, could not take possession of the property of Meghalaya Infratech Limited, and will now have to wait till the final judgment is awarded.

Though Dhar brothers – Ngaitlang Dhar and Sniawbhalng Dhar – are highly influential in Meghalaya, they are still left with no other option but to wait.

Both have been representing Dhar Brothers Construction Company Private Limited, the largest construction firm in Meghalaya, before joining active politics.