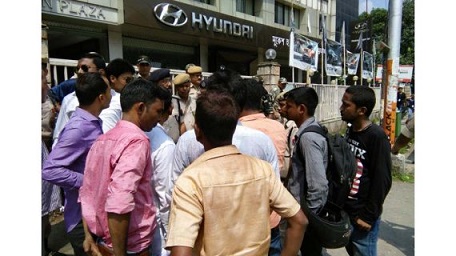 A view of the Mukesh Hyundai showroom at Ganeshguri which remained closed on Friday. Photo credit - Northeast Now

For Mukesh Hyundai, it seems controversy refuses to die down for wrong reasons only.

The car selling company hit the headlines when its managing director Rishav Himatsingka assaulted an employee. That fuelled protests from various organizations who demanded unconditional apology from Rishav. But Rishav was uncompromising and tried to give damn to the protestors. Subsequently he was arrested and put behind the bar.

The Guwahati based girl’s Facebook post delineates her trauma because of the watchman of the company. She can’t even open the window of her residence.

“Sometime at night ….. sometimes in d morning.. .. This person is a watchman of Hyundai service center of Christianbasti GMCH road.  He has no shame at all.. even though he saw me.. in fact he was teasing me more, ” the girl writes in her Facebook post.

These two incidents put the company’s social value at stake. Now the question is — Will Mukesh Hyundai once again beg apology for the perverted acts of its employee? Will it initiate stringent measure against the watchman? Or allow itself caught in the storm of controversies always.