Massive rally in Jorhat against CAA 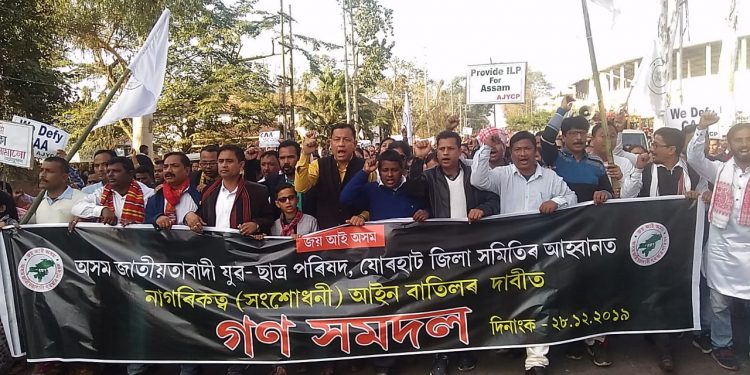 Members of more than 30 organisations and local people participated in a huge anti-CAA rally in Jorhat.

Members of more than 30 organisations and local people participated in a huge rally to protest against the Citizenship Amendment Act (CAA) in Jorhat on Saturday.

The call for the rally was given by Asom Jatiyatabadi Yuva Chatra Parishad (AJYCP) Jorhat district unit and was backed by the All Assam Students’ Union (AJYCP).

Addressing the gathering, AJYCP general secretary Palash Changmai said that the people should be prepared to continue the democratic protest against CAA.

“We should not bow down to the divisive tactics of the state government which was trying all tactics including shooting of innocent people in order to break the backbone of the protestors,” Changmai said.

He condemned the bringing in of a professional police official to try strong-arm tactics on the people but that the people of Assam were made of stronger stuff than this.

“Lachit Barphukan and Laluksola  Barphukan belonged to the same family but the former had fought valiantly to save his country from foreign aggression while the latter sold Guwahati for a handful of money.

“Likewise the people had been betrayed by their leaders time and again but among the people we should start our search for a leader who can lead us and voice our problems at the national level, ” he said.