BJP and its ally AGP have betrayed the people of Assam, says Cong candidate Anil Borgohain 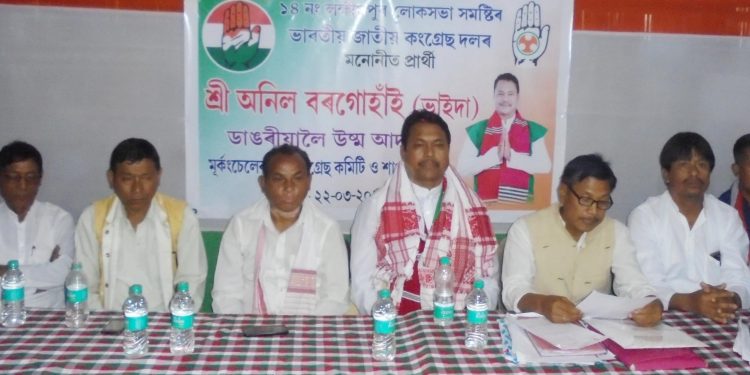 Congress party has sounded poll bugle in Dhemaji district for the upcoming Lok Sabha after the election department has completed scrutiny process of nomination papers of candidates in Lakhimpur constituency.

Congress candidate Anil Borgohain, who was addressing a party meeting at Jonai in Dhemaji district on Thursday, alleged that Bharatiya Janata Party (BJP) and its ally Asom Gana Parishad (AGP) have betrayed the people of Assam and was pushing the indigenous people of the state towards an impending danger through its Citizenship (Amendment) Bill-2016.

Borgohain recalled that state leaders like chief minister Sarbananda Sonowal, AGP and many other leaders were emerged from the movement for protection of the land rights and properties of the indigenous Assamese people, but now they have quit the ideology for vested power.

The Congress party has been opposing the controversial bill and demanding step for safety and security of the indigenous people.

“The BJP made a lot of ritualistic promises to promote living standard of the rural people during last general election, but it has miserably failed to keep the promises. The saffron party bigwigs during last election made a pledge to deport illegal Bangladeshi immigrants from the country, but in the contrary, it invited Bangladeshi and foreign nationals to settle in India thereby created a religious polarization among the countrymen”, Borgohain said adding that unemployment problem among educated youths has increased much during BJP regime.

Sharply criticizing incumbent MP and BJP candidate Pradan Baruah, Congress candidate Borgohain said that MP Baruah and other BJP leaders were involved in conspiracy against him to turn his nomination paper to invalid, which he said was ultimately foiled.

Assuring the people of taking the flood and erosion problems of the area on priority, Congress candidate Borgohain sought the citizens’ mandate to gain power as their MP in the ensuing election.

The Congress party candidate and other leaders earlier addressed a political meeting at Dhemaji and chalked out party’s campaign strategy.