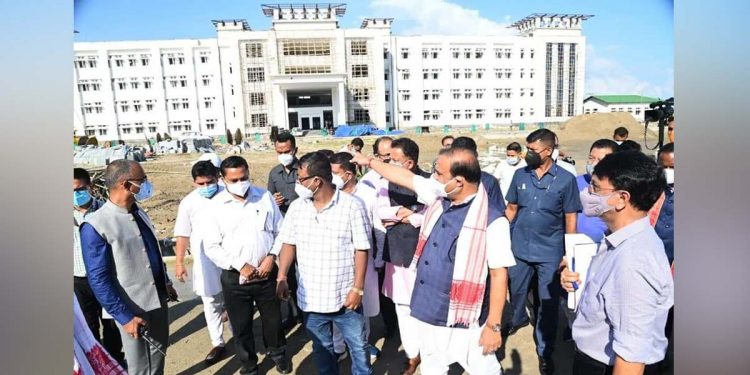 Chief minister Sarma made the announcement on Monday after visiting the ongoing construction works of the medical college and hospital at North Lakhimpur.

“The Lakhimpur Medical College and Hospital will be operational in three to four months. I have come to see the preparations for the inspection by Medical Council of India here,” chief minister Sarma told the media on Monday.

The chief minister inspected the newly-constructed blocks and wards of the hospital.

Sarma also visited the ongoing construction of a stadium at Lilabari in North Lakhimpur and took stock of the progress of the work.

The chief minister said Lakhimpur district will get full package for vaccination of at least one dose in the next 75 days.

On rehabilitation of the flood-affected people, Sarma said the deputy commissioners has been authorized to sanction the amount and he could draw the amount from the district treasuries.

He also said rice can be procured from FCI at Rs 21 per kg instead of buying the same at Rs 37 per kg from the markets for flood relief.

Regarding the erosion issue, the chief minister said the government would take care of the issue in the coming days.

Organized centrally by the state government, the chief minister participated in the yoga session for 30 minutes along with his Cabinet colleagues and other elected representatives after inaugurating the event.

In his inaugural address, chief minister Sarma said every parent should incorporate yoga with the family tradition.

“When our children learn yoga and pranayama they can move far and have a balanced mind,” said the chief minister.

He said the continuation of the 6000 years old Indian civilization and tradition that had been enriching us was attributed to the values developed by the great sages and yoga is one of the best gifts of that value.

He also said yoga is the best way of keeping physical and mental health.

“Those, who regularly practice yoga, have been seen to be more immune to Covid,” Sarma observed in his speech.