The Kokrajhar district bandh, called by the Bodoland Janajati Suraksha Manch (BJSM) and 12 other organisations, has been called off, said Daorao Dekhreb Narzary, the acting president of BJSM.

Narzary in a press statement informed about the withdrawal of the Kokrajhar district bandh called in protest against the proposed visit of the Assam chief minister Sarbananda Sonowal, health & education minister Himanta Biswa Sarma and other BJP leaders to Kokrajhar.

The bandh was called for 12 hours each of three days from October 12-14 has been withdrawn following a discussion with the Kokrajhar superintendent of police.

The Bodoland Janajati Suraksha Manch in a letter addressed to the Kokrajhar superintendent of police said: “In response to your telephonic call we have taken a decision to call off our proposed bandh call on 12, 13, 14 Oct 2020 with an expectation of our issues connected with the previous bandh cal addressed honourable.”

BJSM president Janaklal Basumatary earlier said the present state government has made an abortive and malicious attempt to scrape the BTAD and BTC through the implementation of the so-called new Bodo Accord signed on the concept of ‘BTR’.

Terming the accord a ‘misnomer’, he said it was an un-workable new political arrangement made in haste with mala fide intention to sabotage the 50 years old legitimate demand of the indigenous Bodo-tribal people for a separate Bodoland state.

In a statement, Basumatary said the tribal organizations oppose the state government’s such “detrimental political conspiracy”.

The Kokrajhar district committee of the BJP is hosting the state-level executive committee meeting of ST Morcha from October 12-14 at Kokrajhar Govt. HS & MP School playground in Kokrajhar. 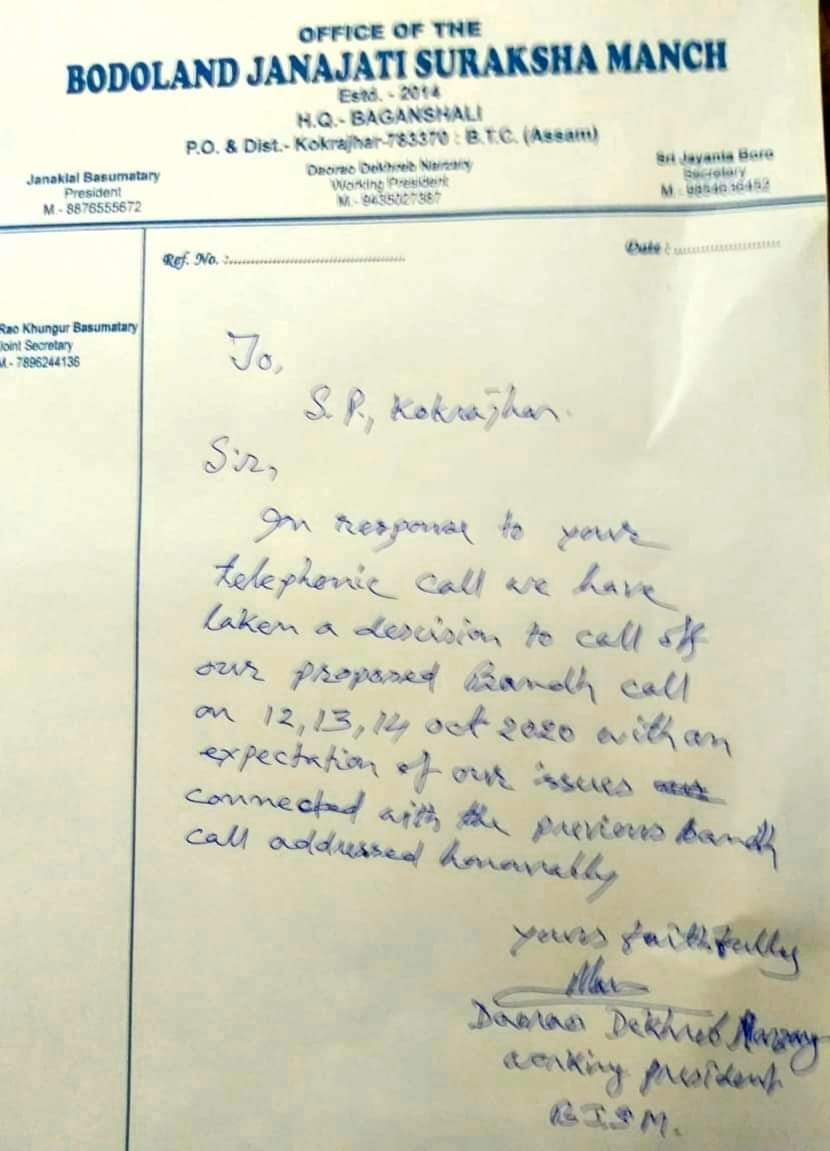