Rampant illegal stone mining in the Karbi Anglong hills, at the southern periphery of Kaziranga National Park resulted in the death of the Mori Diffalo river.

Conservation of Kaziranga National Park as a wild habitat has become extremely difficult as a section of senior Assam Forest officials ‘work’ for the interest of the owners of illegal stone mines.

Rampant illegal stone mining in the Karbi Anglong hills, at the southern periphery of Kaziranga National Park resulted in the death of the Mori Diffalo river.

The drying up of the Mori Diffalo river resulted in scarcity of water for the wild animals of Kaziranga National Park, especially in the dry season.

The Supreme Court on April 12, 2019 passed an order after a complaint was filed by wildlife activist Rohit Choudhury.

In his petition, Choudhury had said that more than 60 illegal stone quarries were in operation at the Karbi Anglong Hills, adjoining the Kaziranga National Park.

The illegal stone crusher plants were at Geleki, Panbari, Rongagora, Silimkhuwa and nearby areas of Karbi Anglong.

Unfortunately, even after the Supreme Court’s ban, wild animals are still facing acute water scarcity in the Kaziranga National Park.

The Mori Diffalo river, which dried up due to heavy siltation from the stone dusts released from stone crushers, could not be recharged.

But, when sleuths of the Assam Vigilance & Anti-Corruption Department on Friday raided the residences of Special PCCF Abhijit Rabha, it exposed his ‘nexus’ with the illegal stone mines owners. 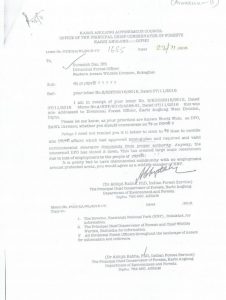 It has come to light that Abhijit Rabha, a senior Indian Forest Service (IFS) official of Assam, was “working” for the owners of the illegal stone mines along the southern periphery of Kaziranga National Park.

In the letter (a copy of which is now in possession of Northeast Now), Rabha told the DFO “not to meddle with Geleki (one of the illegal mining location) affairs, and to concentrate on rhino conservation.”

Rabha also claimed in the letter that the stone mines in the area had approved mining plan and environmental clearances from the proper authority.

It was shocking that Rabha had intimidated another IFS official of the same cadre (through his letter) in a total deprecating language.

Rabha is now unable to answer a number of questions by the sleuths regarding suspicious cash deposits of Rs 4.12 crores between 2011 and 2017 in his bank accounts.

The senior IFS official failed to explain the source of the other high-value cash deposits.

Initially Rabha had claimed that he had earned an amount of Rs 45 lakhs by selling of broccoli in Pajibindha village in Kamrup district.

When the claim was verified, it was found that land does not belong to him, and there has been no broccoli farming in the land ever.

During the raids on Friday, the officials seized documents and articles related to assets, bank accounts and LIC related documents, 4 laptops and mobile phones.

The team also seized cash around Rs 6 lakhs, along with 50 walkie talkie sets.