A view of colourful start to Judima festival in Haflong on Thursday. Photo : Pankaj Kumar Deb

The third edition of two-day Judima festival got off to a colourful start at Dibarai High School Ground in picturesque Haflong town of Dima Hasao district.

Tourists from across the country and abroad as well will have the chance to indulge in the distinct sweet aroma of the traditional local brew made from rice. Judima is a traditional rice wine, a popular alcoholic beverage of Assam’s Dimasa tribe — and an integral part of the community’s social and cultural life. From child birth to death, Judima holds an important role in Dimasa society. 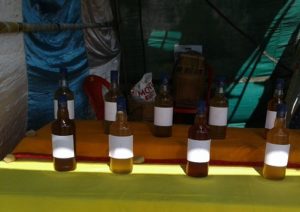 The district is witnessing rush of tourists to the festival site in Haflong. And the atmosphere is also electrifying. Various stalls displaying the traditional food of Dimasa community have been put up besides the stalls of ethnic costumes to attract the tourists as well as the visitors. In fact, the organisers have left no stone unturned to promote the festival which in turn will boost the tourism sector in the state. The main objective of the programme is not only to promote Judima but also to highlight all the age old traditional culture of the Dimasa community.  It has been the effort of the organisers to promote community tourism in the district.

Earlier on December 19 the organisers held Pre-Judima festival bike rally in the district.

Chief Executive Member of the NC Hills Autonomous Council Debolal Garlosa was present on the occasion as the chief guest.