Sonowal has “forgotten” the slogans that he had given against foreigners in the streets of Assam, only to remain in power: AASU leader 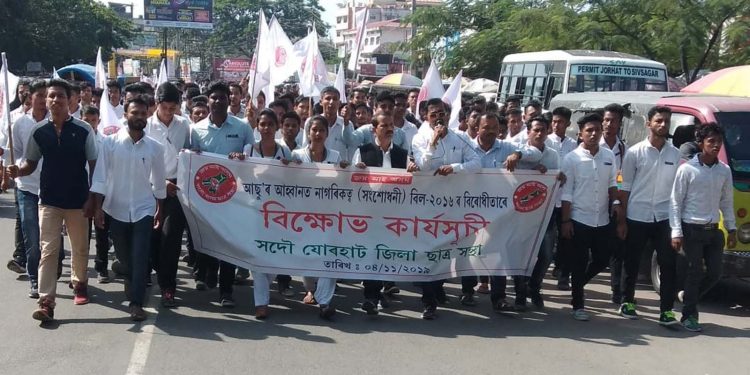 A view of the protest rally taken out by the Jorhat AASU on Monday. Image credit – Northeast Now

The Jorhat AASU took out a protest rally on Monday against Centre’s move to get the contentious Citizenship Amendment Bill (CAB) passed in the Parliament.

The CAB was passed in the Lok Sabha on January 8, 2019 but the Bill could not be introduced in the Rajya Sabha and passed due to massive protests against it across the Northeast.

Also read: Congress to do ‘everything’ against Citizenship Bill

The objective of the CAB is to provide citizenship to Hindus, Sikhs, Christians and Parsis, who faced religious persecution in neighbouring countries like Bangladesh, Pakistani and Afghanistan.

Criticising Sonowal, Khound said, “Sonowal, who had once been a top AASU leader, now has forgotten the slogans that he had given against foreigners in the streets of Assam, only to remain in power.”

It may be mentioned that the six-year Assam Agitation, launched to oust illegal migrants from Assam, was spearheaded by the AASU and Sonowal was also a part of that agitation.

Sonowal as a leader of the Asom Gana Parishad (AGP) also fought a legal battle in the Supreme Court for scrapping the draconian IMDT Act which was imposed in Assam.

The protestors said the students’ body would continue to oppose the Bill until it is withdrawn as passing of the Bill would lead to a severe threat to art, language, culture, identity of the indigenous Assamese people.