Tyagi said that leaders from AGP, AASU among others are in touch with JDU 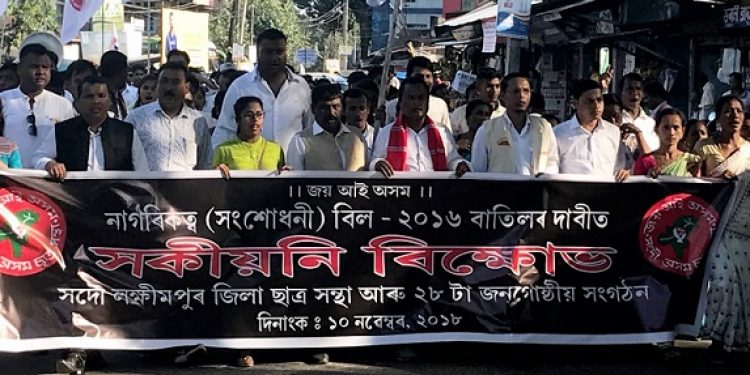 The protest rally in North Lakhimpur against the Citizenship (Amendment) Bill. (File image)

The Janata Dal (United) on Thursday demanded the central government to take all the stakeholders into confidence on the Citizenship Amendment Bill (CAB) before introducing it in the winter session of the Parliament.

He said that his party will also accept a unanimous decision of a Joint Parliamentary Committee (JPC) on CAB.

“If the bill goes to the JPC and it can arrive at a consensus, we will welcome it,” said Tyagi.

Tyagi said that leaders from Asom Gana Parishad (AGP), All Assam Students Union (AASU) among others are in touch with him over the matter.

Referring to the National Register of Citizens (NRC), Tyagi, however, raised question on the NRC in Assam.

“The Assam government itself said that it has not accepted the final NRC…what does it mean and what would be the importance of Assam NRC at the national level?” asked Tyagi.

Assam finance minister Himanta Biswa Sharma on Wednesday said that his government has not accepted the NRC in its present form “due to severe anomalies.”