The International Human Rights Council (IHRC), a United Nations-recognised organisation, has expressed its willingness to be the mediator between the ULFA(I) and the Centre.

IHRC national general secretary Kamal Raj Chetry has written a letter to the ULFAI) Commander-in-Chief Paresh Baruah expressing the organisation’s willingness to mediate between the outfit and the government.

“IHRC is elated with the recent news of your decision and willingness to negotiate with the government (Govt. of Assam and Central Govt. ) to bring an end, the differences between you and your contemporary,” the letter to Paresh Baruah said.

Stating that the IHRC believes “the decision to sit and negotiate is the very foundation” towards progress, the letter said: “The past 4 decades have been devastating and countless brave soldiers have sacrificed their lives from both the sides bringing pain and misery for the family members.” 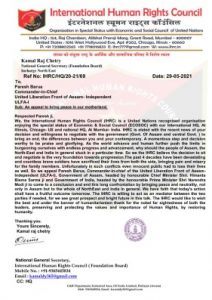 Unfortunately in such conflicts even innocent public had to loss their lives as well.

“So, we appeal Paresh Barua, Commander-in-Chief of the United Liberation Front of Assam-Independent (ULFA-I), Government of Assam, headed by honourable Chief Minister Shri Himanta Biswa Sarma and Government of India, headed by the honourable Prime Minister Shri Narendra Modi ji to come to a conclusion and end this long confrontation by bringing peace and neutrality, not only in Assam but to the whole of North-East and India in general,” the letter said.

“We have faith that today’s action shall have a fruitful outcome tomorrow. The IHRC is willing to act as an mediator between the two parties if needed, for we see great prospect and bright future in this talk,” the letter further said.