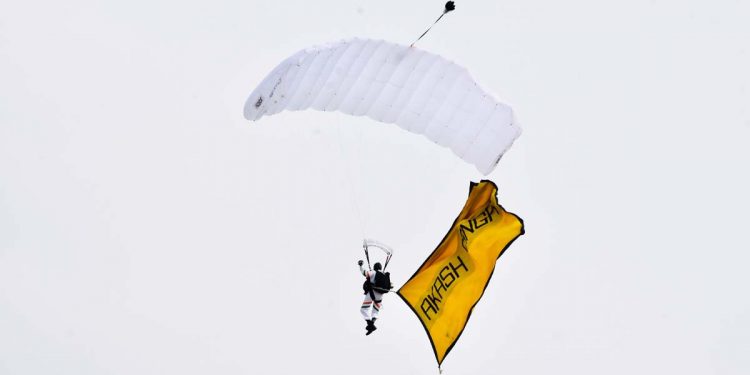 The IAF’s 49 Squadron, also known as ‘The Paraspears’, celebrated its Diamond Jubilee in Jorhat on Sunday.

They have been a lifeline to the Indian Army, ITBP and civilians located in the treacherous and inhospitable terrains of the Northeast since its inception at Barrackpore on February 2, 1960.

It was initially equipped with Dakota aircraft before moving to its present location in May 1962.

The IAF’s 49 Squadron was re-equipped with An-32 aircraft in September 1984, defence sources said.

The squadron holds a unique distinction of participating in the famous ‘Tangail Drop’ operation in December 71.

It was the largest airborne assault undertaken by any air force in the world, since World War II.

To commemorate this occasion, various events were organised from January 31 to February 3 at the Air Force Station Jorhat, defence sources added.

A fabulous display of air assets available in Eastern Air Command was organized on Sunday.

Air Marshal R Sachdeva, DCIDS (PP& FD) at HQ IDS was present as the chief guest at the event.

A large gathering of serving and retired officers, their families, school children and NCC cadets attended the function.

#49Sqn #Paraspears of @IAF_MCC celebrates its #DiamondJubilee at AF Stn #Jorhat . The Sqn , est in 1960, while operating #Dakotas in 1968, holds the distinction of lifting over 1600 tons of service load in one month.
Up… Up…. Forty Nine…@DefenceMinIndia @SpokespersonMoD pic.twitter.com/GKCQhcV1dW

The recreation of capture of Poongli Bridge during Tangail Drop jointly carried out by the IAF and Indian Army received special applause from the spectators.

The performance by the Aakash Ganga Para team and the Air Warrior drill team kept the audience enthralled.

The entire event left an everlasting and unique impression on the audience at Air Force Station Jorhat.

The IAF’s 49 Squadron has also contributed to disaster relief to civilians affected due to floods and natural calamities in the northeastern region.