I am a corona patient, please give me food

Even being a journalist I was denied basic facilities during home quarantine, what will happen to ordinary patients 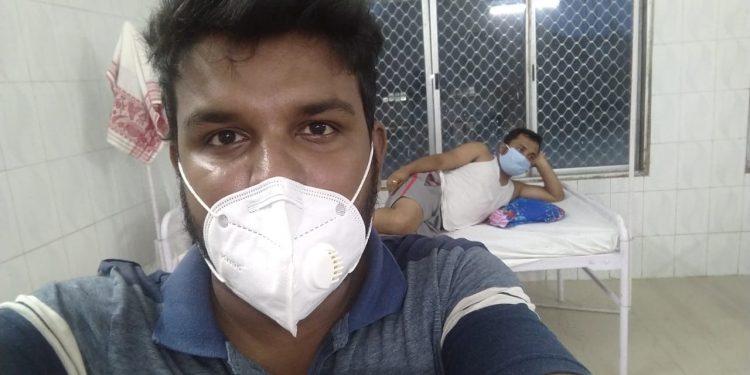 Being a journalist, I always raised my voice for the common people.

Now I am compelled to raise voice for my own rights.

There was a time when I, as a reporter of Northeast Now, the web portal, was also a corona warrior and was relentlessly doing my duty moving from one corner to the other of Guwahati in the fight that was launched by the State Government against COVID-19.

I raised my voice whenever there were irregularities in food distribution among the inhabitants of containment zones.

I stay in a rented accommodation at Sixth Mile area of Guwahati.

When four of my neighbours tested COVID-19 positive, I also went for swab test on July 1 last.

Then I and three of my mates at the rented house stayed in isolation till our swab test results came.

After six days, that is on July 6, the Health department informed us that all three of us are COVID-19 positive.

And we were identified as COVID-19 patients.

However, I would like to highlight that since then I did not develop any coronavirus related symptoms.

My room-mate had mild fever cough before the swab test.

However, his fever subsided and even got considerable relief from his cough in the later days.

On July 6 evening, the Health department asked us to get ready by next morning as an ambulance will be sent to pick us up to be taken to COVID care centre.

Accordingly, I was ready by next morning to go to the hospital.

Here I would like to add that my roommate was taken to the hospital on July 6 night itself by an ambulance arranged by his organization where he also worked as a journalist.

He was taken to the COVID care centre set up at IIT-Guwahati.

Though I and my brother were ready by the morning of July 7, the ambulance finally came at around 3:30 pm.

I and my brother were taken to the Ayurvedic Medical College Hospital at Jalukbari.

I would like to reserve our experiences at the hospital for a later period.

We were kept in the hospital till July 11.

On that day, the antigen test was conducted and we tested negative.

We were asked to go for 14-day home quarantine on July 11.

A special vehicle carried all the negative patients to their respective homes.

My roommate also arrived on the same day from IIT-Guwahati.

I came to know from him that he was given complete ration for his 14 days home quarantine period.

However, I and my brother Lakhyajeet Bora did not get anything after being released from Ayurvedic College hospital.

Then I called up the emergency helpline number 104. I was told from the other end that my complaint of not receiving ration has been registered.

They also told me that my complaint has been forwarded to the concerned authority.

I waited for the day and managed to cook something from whatever little I had in my room.

As there was no one nearby, we faced a shortage of food the next day, that is day two of our home quarantine.

My roommate shared some of the rations that he received.

Later in the evening, the Health department called up and enquired whether I had lodged a complaint the previous day through the emergency helpline number 104.

I was asked if my problem has been addressed or not.

When I answered in negative, they again asked my complete residential address.

On July 13, the third day of our home quarantine, I again called up 104 asking for food.

They asked me to contact the local police station.

But there was no response.

Another day passed as we had to manage with the bare minimum resources that we had in our room.

On the fifth day of my home quarantine, I again contacted 104 and got the same reply to get in touch with the local police station.

I told them that I did not get any response from the police.

On the sixth day, that is on July 16, I desperately contacted additional commissioner of police at Dispur Police Station, Himanshu Prasad Das.

He asked me to send my residential address through text message.

However, 24 hours have passed since then, and I am yet to receive any help.

Friday is the seventh day of our home quarantine.

Meanwhile, the ration given to my roommate for just one person has almost exhausted.

We are yet to complete another seven days of home quarantine.

We cannot move out as it will be against the guidelines set by the government.

Moreover, our house is also sealed.

We are in a helpless situation.

Now the state Health department should reply as to what we are supposed to do.

From where we will get food?

We have realized that being journalists, we have abided by all the guidelines set by the government.

Even then we are deprived of our basic needs.

It needs no elaboration on what other ordinary COVID-19 patients might have gone through in the State.

I have got reports that desperate people have tried to come out of containment zones at Maligaon and Pandu areas of the city.

If my roommate would not have been there, we would have starved by now.

It is surprising that there is still some lacuna in the entire process even the state health minister claims that everything is going on smoothly.

For whose lackadaisical attitude that the health minister has to face criticism?

If one person of the same house receives ration for 14 days, why the other two are deprived?

At the end, I again appeal to the state Health department:

“I am a patient in home quarantine. Please give me food”.