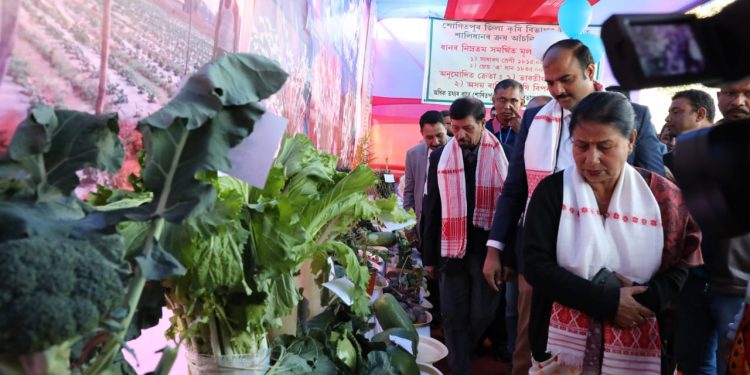 The two-day mela which has been organized jointly by the District Agriculture Office and Agriculture Technology Management Agency (ATMA) with active cooperation from various allied departments has on display a wide variety of produce by farmers across the district along with an exhibition on the advanced technologies and equipments used to boost agricultural produce along with sale counters.

The one-of-its-kind Krishak Mela has included interactions of successful farmers with government department officials and agricultural scientists as a chief attraction, with the aim to motivate other participating farmers to take up similar profitable agricultural ventures.

Discussions related to various topics such as cash-crop farming, scientific poultry farming and pig rearing, preservation of fruits and other crops, floriculture practice, integrated fish farming, roof-top / kitchen gardening, mushroom cultivation and marketing, Muga and Eri rearing, loans for farmers, organic farming, among others will be held across the two-days of the mela.

Delivering the inaugural speech Deputy Commissioner Manvendra Pratap Singh stressed on the need to bring as many farmers under the umbrella of various government schemes as possible in line with Prime Minister Narendra Modi’s vision to double the income of farmers by the year 2022.

He appealed to the farmers to come forward and avail the benefits of various subsidy schemes offered by the government and to be open to adopt new technologies in the field so that production can be boosted with the ultimate aim to usher in a new green revolution in the district.

The Deputy Commissioner said one of the main aims of holding the interactive sessions with successful farmers in the Krishak Mela was to encourage the young generation to take inspiration from such stories and take up new agricultural ventures which can prove profitable.

He also spoke in brief about the various schemes and facilities for farmers being offered by the government which can go a long way in exploiting the district’s agricultural potential to the fullest.

Speaking on the occasion, Tezpur MLA Brindabon Goswami welcomed the step taken by the government in organizing the mela and said such activities will go a long way in encouraging and motivating farmers by boosting their confidence.

He later inaugurated the exhibition and inspected various stalls put up by the allied departments.

Two Aadhaar enrollment centres have also been set up at the venue with the view to cover any person who has not enrolled for Aadhaar yet.