In order to maintain public peace during the forthcoming Holi Mahotsav, the festival of colours, the district administration of Kamrup Metro has declared March 9 as dry day.

According to an order, issued on Saturday, by the deputy commissioner of Kamrup Metropolitan district, all the retail Indian Made Foreign Liquor (IMFL) shops and the country spirit shops in the district will remain closed on March 9.

The order says: “In exercising power conferred under section 52 (1) of Assam Excise Act, 2000, the undersigned hereby declares the closure of all the retail IMFL “ON’/”OFF”/ Club” licenses and all the Country Spirit Shops in Kamrup Metropolitan District on 9th March, 2020 till 4 P.M. of the day for preservation of public peace in view of the “Holi festival”.

“Any violation of the above will be viewed seriously,” the order added. 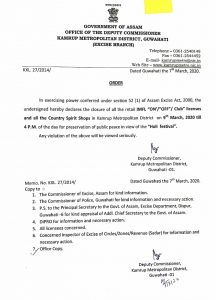 Meanwhile, the Kamrup Metro district administration has declared March 10 as a local holiday on account of Dol Jatra/ Holi festival.

On March 10, all the state government offices, schools and colleges, and all financial institutions will remain closed.

Mizoram churches to open on weekends from February