Contributions flow in from several organizations, individuals to extend help to flood affected people of Assam

He also thanked him for showing concern and support to the flood affected people of the State.

‘Thank you Haryana CM @mlkhattar ji for contributing ? 5 crore towards those affected by the floods in Assam. Your concern and support gives more strength to the entire state to fight this natural calamity.’ 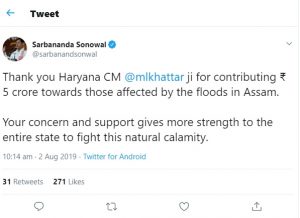 Non-governmental organizations Ajmal Foundation and Markazul Maarif handed over cheques of Rs 10 lakh and Rs 5 lakh respectively to the Assam chief minister as their contributions to Chief Minister’s Relief Fund.