Guwahati is one of the venues for the FIFA U-17 Women’s World Cup India 2020.

Guwahati has been selected along with four other venues by the officials in New Delhi on Tuesday.

After the announcement of the venues, Assam chief minister Sarbananda Sonowal took to Twitter to break the news. 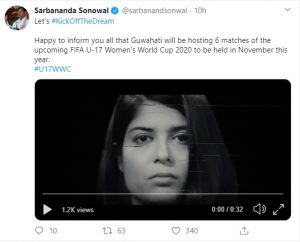 Happy to inform you all that Guwahati will be hosting 6 matches of the upcoming FIFA U-17 Women’s World Cup 2020 to be held in November this year.’

The other four venues are Ahmedabad, Bhubaneswar, Kolkata and Navi Mumbai.

Sixteen teams featuring the rising stars of women’s football will compete across 32 matches to lift the coveted trophy in Navi Mumbai on November 21.

The action begins 257 days from Wednesday.

After confirmation of the venues, union sports minister Kiren Rijiju said, “It gives me immense pleasure to congratulate the five cities hosting the FIFA U-17 Women’s World Cup India 2020.”

“As India prepares to host yet another FIFA event, I look forward to the support from the whole country in making this tournament a rousing success,” he added.

“Our Indian U-17 women’s team will be playing in a FIFA tournament for the first time,” Rijiju informed.

“It is a proud moment for the nation and we will provide all possible support to ensure its success,” he further said.

The official slogan – ‘Kick Off The Dream’ – was also unveiled at a press conference in New Delhi.

The inaugural match will be played on November 2 later this year.

The quarter-finals will be played on November 12 and 13.

The semi-finals are slated for November 17 next.

The play-off for the third place and the final will be played on November 21 later this year.