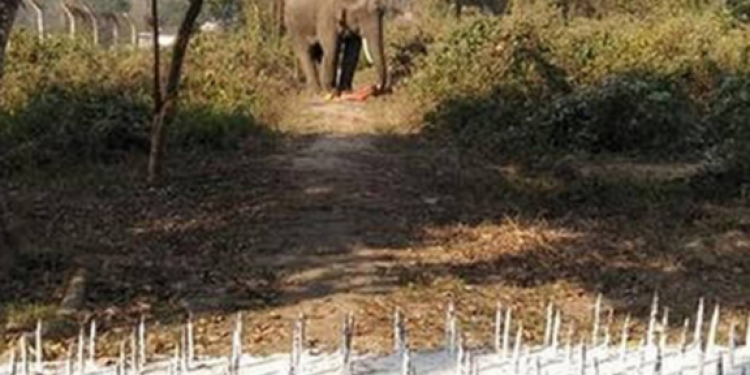 The iron spikes laid down by Army at Narangi Cantonment area in Guwahati. Image - The Hindu

As reports of iron spikes laid down by the Army at Narengi Cantonment area in Guwahati claiming wild elephants raised concern of the Assam forest department and animal lovers, the Army has started removing the barriers from the area.

According to reports, a barrier was put up by the Army authorities at Narangi Cantonment area in Guwahati bordering Amchang Wildlife Sanctuary in Assam turned out to be a virtual deathtrap for the pachyderms.

The bed of metallic spikes was laid down by the Army reportedly to prevent the pachyderms from destroying food stock of the Army in the Narangi Cantonment area.

The spikes were placed outside the periphery of a major supply depot of the Army Cantonment in 2003.

But the spikes claimed lives of two wild elephants and caused injury to many pachyderms, according to forest officials.

However, a report published by G Plus quoted a senior army officer as saying that they have noted the reports of elephant deaths and started to remove the spikes.

Media reports quoting Assam’s forest officials stated that the Army had earlier ignored any formal request by the department to remove the iron spikes.

The divisional forest officer of Guwahati Wildlife Division, Pradipta Baruah, had reportedly dashed off the last letter to a Colonel in charge of the Cantonment through which he sought removal of the iron spikes after the spikes claimed the first death elephant on December 25, 2018.

Wildlife veterinarians had claimed that the second wild elephant died in February this year.

Pradipta Baruah, DFO, Guwahati Wildlife Division had reportedly said: “This is insensitive and cruel, and has led to severe injuries in several elephants – of which two have died. We do not even know if more have died or were injured. It is generally when an injured elephant is near human habitat that we come to know about its presence.”

It was reportedly that the second elephant which had died in February this year received severe injury in its leg which was “beyond recovery as the pachyderm was carrying the injury for a long time”.

Also read: Cruelty at its peak

Environment journalist and wildlife activist in an article published by Northeast Now has stated: “December 25, last year, at about 2 am one wild elephant was injured at supply depot of Narengi Army Cantonment, after getting speared into feet by iron spikes driven into the ground at supply depot by Army personnel.”

“This type of cruel effort to keep the elephant at bay is definitely going to defeat the very spirit of wildlife protection and empathy for wildlife. Less harmful is the way to raise solar electric fencing around depot.,” she further stated.