Elephants share a crucial relationship with forests that has evolved over millions of years. With fragmented forests, elephant populations across all its once strong holds in the continent are now doomed to dwindle. Vital migratory pathways or elephant corridors, including inter-state corridors, those provide contiguity to different forests for this long ranging animal are also taken over leading to confrontations and conflict between man and animal.

Assam remained an epicentre of this conflict for more than three decades now. The phenomena started in the 70s and 80s in the two districts–Sonitpur and Golaghat— spread to Nagaon, Karbi-Anglong, Hojai, Lakhimpur Jorhat, Majuli, Dibrugarh, Tinsukia to Kamrup, and Goalpara. A WWF survey once revealed that Human Elephant Conflict (HEC) in Sonitpur was one of the most alarming of such conflicts in the planet. 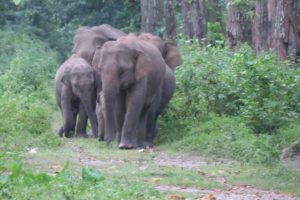 Clearing of forests in inter-state and international boundaries added to the worsening situation. Once the east-west movement of the pachyderm was blocked, they started coming down to the plains. Human activities inside the forest compel the pachyderms that require hundreds of kilograms of food each day to move out and search for easy food in the paddy fields that has given rise to man-elephant conflict with a heavy toll on either side.

The year 2016 saw the death of some 65 elephants—from poisoning, poaching, death in trenches of tea gardens and industrial structures and a mounting number of fatalities on railway tracks. Irony also lies in the fact that in the land of Hasti Vidyarnab elephants are dying due to lack of treatment!

Retaliatory killing–a cause of much worry

The year 2017, till now has recorded some 67 elephant deaths. In the worst case scenario, five adult elephants died along with an unborn calf that came out of the mother’s womb as the animals were mowed down by the Guwahati-Naharlagun Inter-City Express near Bam gaon Tea Estate at Balipara, Sonitpur district in the night of December 10. Similar incidents happened earlier this year in Lakhimpur district and at Chandrapur on the Guwahati outskirts.

Elephants are also dying in the state when they come in contact with sagging high voltage wires. Two elephants died in Kaliabor in Nagaon district last month after coming into contact with a high voltage wire that was dangling low above the ground. Of late, retaliatory killing has become more worrying.

“Carcasses of wild elephants have been recovered from various places– believed to have died of poisoning, bullet wounds and electrocution—all retaliatory acts. There are also reports of death of elephants from septicaemia as result of wounds from sharp bladed fences in and around cultivations particularly tea plantations. Also a number of elephant calf deaths come from tea gardens after falling in trenches,” sources in the forest department confirmed. 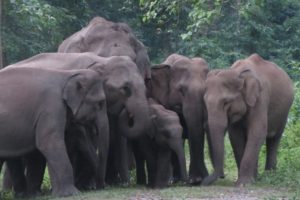 On the other hand, some 61reported cases of human casualty poured in till the first week of December this year. Bobita Kerkatta was a final semester student from a tea garden near Ghoramara in Sonitpur. On October 24, Bobita was attacked by wild pachyderms on her way home. She succumbed to her injuries. Bobita’s family told us that the tea garden authority had earlier given away land for creation of forests for the homeless giants. However, that portion of land has come under a project–the Patanjali Herbal Food Park – a project now mired in controversy.

Conservationists allege that the Assam government over a period of time has transformed a critical wildlife habitat into an industrial site and the present government has given away hundreds of hectares of this site to Baba Ramdev’s brand. That the site continues to be an integral part of a much important elephant corridor was proved when in last November a terrible tragedy struck the Food Park.

An elephant and her calf along with another male elephant fell-into a 10-feet ditch dug for construction of walls of the project. While the male and the calf could be saved, the mother succumbed to her injuries. The infant’s efforts to wake the dead mother met with grief and indignation throughout the state and the Forest Minister was quick to spell stringent action for defaulters. She even pointed that the Patanjali authorities would be consulted to redraw the boundaries leaving some space for the poor pachyderms.

However, in reality nothing of that sort happened and the jumbos were forced to define their corridors—albeit in their own way! TV footages show wild pachyderms making their way after they managed to bring down a part of the newly-built boundary wall of the Food Park.

The State Forest Department has failed miserably in the conservation of the mega fauna. More than 20 districts of the state bore the brunt of human-elephant conflict. Sonitpur is one of the worst hit. Encroachment by illegal settlers as well as encroachment of protected areas including Sonai-Rupai for government projects–flouting all norms of the 1972 Wildlife Act–has seen the conflict turn into a desperate crisis.

The annual migration of elephants is an endearing spectacle of nature. The majestic animals moving and rumbling through forests and open grounds, young ones playfully crossing the rivers and streams under the careful protection of elders invoke a strong yet genteel picture of might and tenderness. But with changing circumstances that feeling of awe has transformed into fear and insecurity that dipped the tolerance level in both humans and elephants.

To avoid injury when actually elephants are destroying homes or laying waste the stores is no child’s play. So there are reports of forest guards being roughed up for not firing at the depredators! The mega faunas are irked at the slightest provocation as they are constantly fighting wounds and obstructions.

A couple of years back, working in a human-elephant conflict zone, we were chased by a herd in an otherwise peaceful situation. While capturing the giants for a documentary in the Nonoi range, Udalguri, our cameraperson was moving his camera tripod that the elephants took for a weapon aiming at the herd! The trumpeting of two charging wild elephants from some 15 feet vaporized my trainings of elephant behavior for all these years in a second. I heard someone say ‘run’ and I ran for our vehicle throwing away all the norms of the dos and don’ts to the wind! 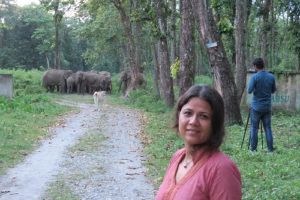 The predicament of the mega fauna has become a major concern for conservationists the world over.  Despite the fact that elephants remain an integral part of our culture, heritage and religion they continue to remain neglected by our forest department.

“Elephant conservation plans saw pouring in of elephantine funds from the Western agencies but the lions share continues to be siphoned off by the implementing authorities. Conservation strategies and conflict mitigation approaches largely remain confined to boardroom discussions and never reached the targeted level”, lamented Jayanta Das who worked as coordinator of Elephants on the Line programme.

In the grassroots, people are yet to be motivated. Worse still, adequate compensation—whether for loss of life or injury or loss of property or livelihood–never reached most of the victim families. The Assam Environmental NGOs Forum has been pressing the State Government for recovering the lost wildlife corridors in Kaziranga landscape but clearing of the elephants’ migratory pathways from obstruction someway seems distant. In reality, we failed utterly to gain even an inch of forest land — the only solution for the long-term survival of the animal!

China plants its 5-starred red national flag on the Moon