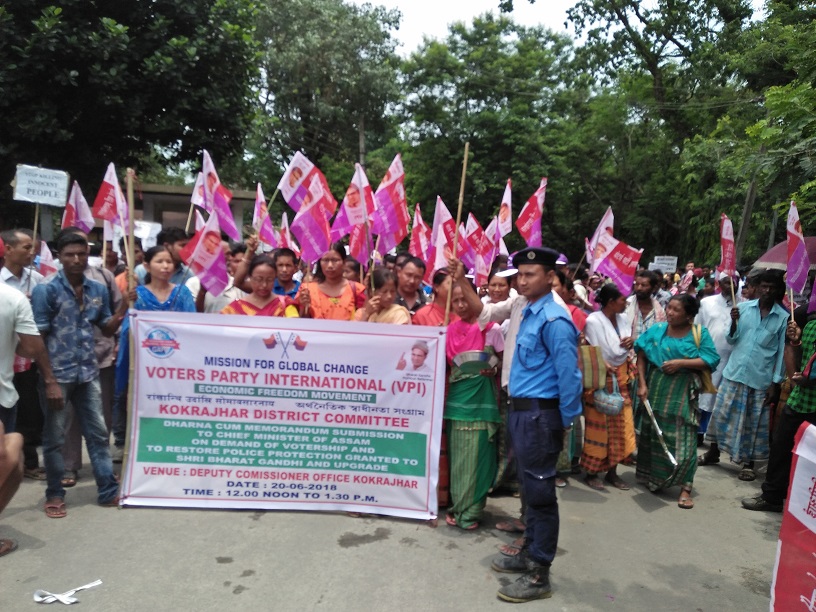 In a surprising budge, some hundreds of villagers from the far flung areas of Kokrajhar and Chirang districts of lower Assam are seen to be excited running from pillar to post to get money under Voters’ Party International (VPI) card as the party has been beating the drum especially in the remote places where the literacy rates are poor to get their support for their candidates in the forthcoming parliamentary elections in 2019.

Several hundreds of people from remote villages from Kokrajhar and Chirang, mostly Bodos and Adivasis came to Kokrajhar town to join the demonstration brought out by the VPI, Kokrajhar district committee at Children Park and submitted memorandum to Assam Chief Minister Sarbananda Sonowal through the Deputy Commissioner, Kokrajhar with a slew of demands.

These include direction to the office of department of Home, Government of Assam to restore police protection granting to Bharat Gandhi and upgrade the number of his security, direction to the office of Principal Secretary of department of Home for granting permission to CID of the state for legal action in bunch of crimes committed against Bharat Gandhi and his associates of VPI in various districts of Assam, direction to the cabinet secretary to initiate actions to pass resolution from the legislative assembly of Assam and sent to the government of India to make law on right to get voter ship, the tool of inclusive growth and tool of participation of each and every voters, direction to cabinet secretary to initiate actions to make all types of bandh to restrain road and rail in the state and fixed the responsibilities of dead caused by bandh and to issue direction to the office of Principal Secretary, department of Home to grant police protection to state president and all district president of VPI, including Karbi Anglong and BTC where they alleged that their party bearers have been manhandled.

Some hundreds of villagers from remote areas took part in the demonstration.

Interestingly, the villagers who came to the demonstration brought I-card issued by the VPI and some photostat centres in Kokrajhar were seen extremely busy for copying their I-card who submitted the photo copy to the VPI in the demonstration.

The I-Card issued by the VPI had neither signature of issuing authority and holder of card and there is only seal of VPI which is also not clear.

When the media persons asked the villagers about the issuing of I-Card and its benefits, in the xerox corner they said that they got the I-Card giving an amount of Rs 250 to VPI.

They also said they had got voter’s right after being member of the VPI and they will get Rs 50,000 as benefit annually.

They, however, were mute when asked what actually the voter’s right mean. They simply said that after getting I-Card from the VPI, they have become eligible to get money from the government of India.