France agency to ink pact with Assam for biodiversity conservation 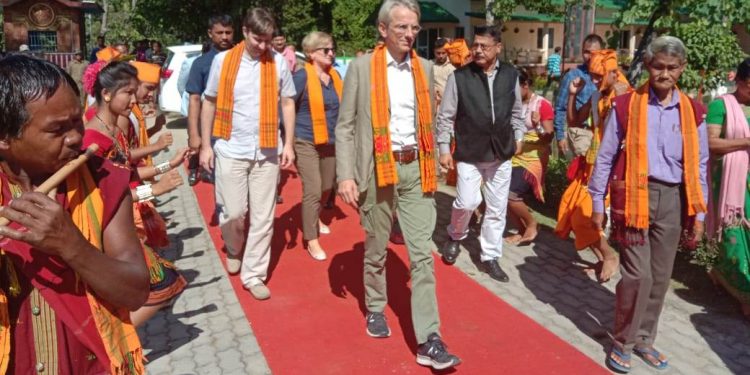 The delegation has headed straight to Kaziranga National Park to see on spot activities.

The Agence Francaise de Developpement (AFD) and Assam government is likely to sign a project agreement worth 50 million euro to support the state government’s initiative to restore Assam’s forest ecosystems and preserve their biodiversity.

A senior official of the Assam Forest department said a French delegation have arrived in Guwahati on Saturday for signing of the agreement.

The agreement is expected to boost the biodiversity conservation efforts in Assam.

The delegation which included Ambassador of France to India, Emmanuel Lenain and Country Director of AFD, Bruno Bosle among others were welcomed by the Assam’s Principal Chief Conservator of Forest (PCCF) AM Singh at the LGBI airport here.

“The delegation has headed straight to Kaziranga National Park to see on spot activities of the Assam Project For Biodiversity Conservation (APFBC),” the official said.

“On Sunday the French delegation will return to Guwahati to share their tour insights with members of the Department of Environment and Forests, and the Assam State Biodiversity Board,” he said.

The French delegation is also scheduled to meet Assam governor Jagdish Mukhi and chief minister Sarbananda Sonowal on Monday before signing of the agreement.

Although the sources did not reveal much about the projects, it is learnt the project will include management, micro-planning and community engagement, livelihoods and skill development for biodiversity conservation.