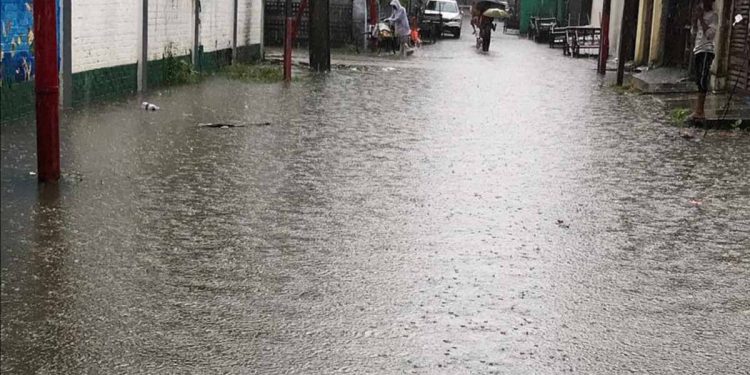 Assam Chief Minister Sarbananda Sonowal‘s home district Dibrugarh is reeling under severe flood, triggered by heavy rains that lashed the district in the past few hours.

The major streets of the town were waterlogged. Similarly, like every year flood inundated the town.

The Dibrugarh Town Protection Drain (DTP) is overflowing due to the constant rain and it has lost its capacity to flush out water from the town.

Dibrugarh’s main lifeline, the Mancotta road was badly affected by the flash flood especially in front of the deputy commissioner’s office and the 1-km stretch from Chowkidinghee traffic point up to the Thana Chariali flyover.

The entire stretch of road resembled a river with the water level reaching up to the knee-level.

The heavy downpour also submerged the office of the superintendent of police, Dibrugarh police reserve, Milannagar and Gabharupathar police outposts.

Even the office of the Dibrugarh Municipal Board was hit by the flash flood. The campus of the All India Radio, Dibrugarh at Boiragimoth was also submerged by the heavy downpour.

Similarly, the railway workshop was also badly hit by the waterlogging.

“Every year we face a similar situation during monsoon,” said Kanti Pal, a resident of Khalihamari.

“The Dibrugarh district administration has failed to address the water logging problem of the town, which caused extensive damage in 2015,” Pal added.

“In 2015, the entire town was submerged and we are facing similar kind of situation now,” Pal added.