Extreme heat in Guwahati: All schools to remain closed on Aug 27, 28

To protect the school students from the onslaught of hostile weather, the district administration of Kamrup (Metro) on Monday announced that all the schools in the district would remain closed for next two days.

The schools, both under government and private sectors, will remain closed on August 27 & 28 as per the order.

The extreme heat condition in the last few days caused great inconvenience to the school-going children of the city. 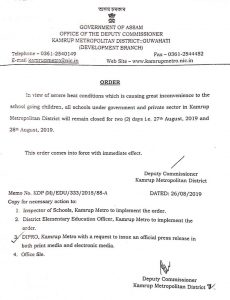 The announcement by the district administration has brought a sigh of relief also to the parents of the school students of the city.

The order, issued by the Deputy Commissioner of Kamrup (M) said: “In view of severe heat conditions which is causing great inconvenience to the school going children, all schools under government and private sector in Kamrup Metropolitan District will remain dosed for two (2) days i.e. 27th August, 2019 and 28th August, 2019.”

“This order comes into force with immediate effect,” the order further said.

The Deputy Commissioner of the district has also instructed the Inspector of Schools and the District Elementary Education Officer, Kamrup (Metro) to implement the order.

It may be mentioned that Guwahati recorded highest temperature of 37 degree Celsius.

According to information, many school children have fallen sick due to extreme heat.

Besides, frequent load-shedding has also affected the school children while attending their classes.