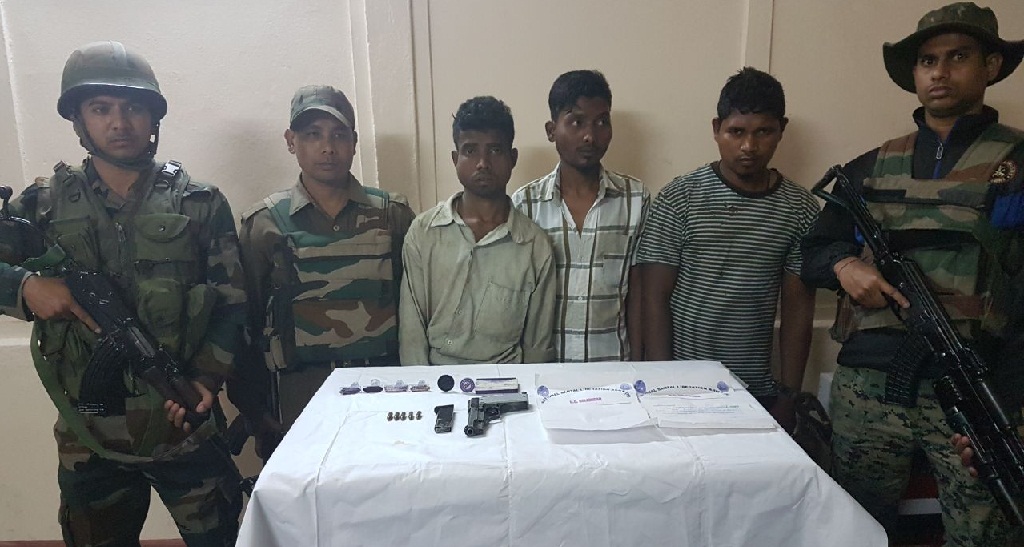 NLSA cadres nabbed with arms and ammunition in Kokrajhar.

Coming to enjoy a marriage ceremony in a village under Gossaigaon Police Station in Kokrajhar, three cadres of the anti-talk faction of the National Santali Liberation Army (NSLA) including its C-in-C, landed in the trap of police and Army on Monday night.
In a joint operation Gossaigaon Police and Army nabbed three NSLA(Anti-talk) cadres at Quintenpur village under Gossaigaon Police Station in Kokrajhar district on Monday night.
The trio was nabbed from at around 11.15 pm. The joint operation was led by the Sub-Divisional Police Officer (SDPO), Gossaigaon.
Rajen Singh, Superintendent of Police (SP), Kokrajhar said, “The joint operation was carried out by police and army under the leadership of Gossaigaon SDPO and three cadres of the anti-talk faction of NSLA, an Adivasi militant group, were arrested,” adding, “They came to enjoy a marriage ceremony in Quintenpur village. After being alerted over arrival of the joint operation team, the trio was hiding in a nearby house from where they were nabbed.”
The three militants have been identified as the outfit’s C-in-C 29-year-old Dipak Hembrom alias Bajun alias Sorai alias Bijoy, son of  Soleman Hembrom from  Molekapur village under Gossaigaon Sub-division, 22-year-old Binay Murmu alias Maranda, son of Isac Murmu from Shoshoghutu village under Gossaigaon PS and 27-year-old Sibastin Soren, son of  late Mikel Soren from Lotamari village under Gossaigaon PS.
From the possession of the trio, one 9 mm pistol, one magazine, 5 live rounds of 9 mm ammunition, one blank NSLA letterhead and one) extortion letter without addressee, six NSLA stamps and one stamp pad, the SP added.
The Kokrajhar Police head also said, “Interrogation is going on to get more information from the arrested NSLA cadres.”