CMSS stages protest in Margherita against deplorable condition of NH 38 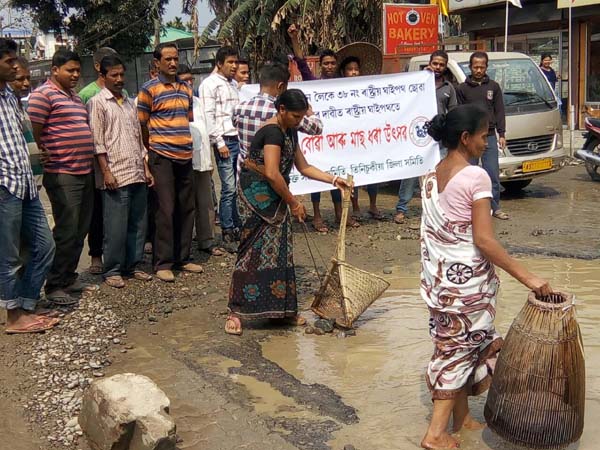 In a unique protest Chatra Mukti Sangram Samiti(CMSS) along with locals of Margherita on Saturday ploughed the roads and caught fish in the middle of Block Tiniali due to the bad condition of National Highway 38.

For past few months the people of Margherita have faced a harrowing time due to the pathetic conditions of roads. For two hours the people protested on the road by ploughing and catching fish.

“The roads of Margherita are worst. Big potholes in NH 38 near Block Tiniali has created problems for the passerbys. Many accidents took place in the area because of such potholes but the administration has not taken any step so far. So, we have organized a protest,” alleged the local people.

The NH 38 connects with Arunachal Pradesh and such bad condition of the road is a threat for the people who travel through this road.

“The BJP has failed to meet the demands of the people. The BJP government have promised good roads for better connectivity but after repeated pleas of the people to local MLA Bhaskar Sharma he failed to construct the road,” said Lakhyajyoti Gogoi, President of Tinsukia unit, CMSS. He said they have submitted a memorandum to Deputy Commissioner of Tinsukia.

According to the Students’ organization, everyday trucks ply to Arunachal Pradesh through this road but district administration is not taking the matter seriously. ‘Recently, many accidents took place in the area due to the deplorable condition of NH 38 road. If the road is not constructed within a stipulated time then we will intensify our movement,” Gogoi added.