I appeal to all regional parties of Northeast to cut all association with the BJP: Mozoram's ZNP leader Lalduhawma 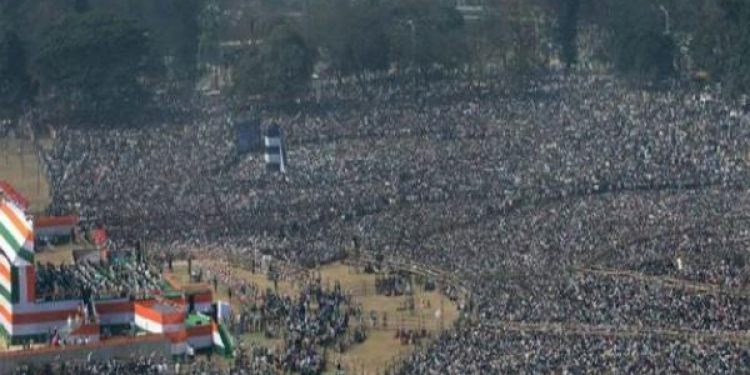 Lakhs of people gather for Opposition's show of unity at Kolkata's Brigade Parade grounds on Saturday.

Launching a scathing attack on BJP, former Arunachal Pradesh Chief Minister Gegong Apang, who resigned from the party earlier this week, said that the Citizenship Bill is dividing the Northeast.

Speaking at a mega opposition rally hosted by West Bengal Chief Minister Mamata Banerjee in Kolkata on Saturday, Apang said, “Last four years have been a testing time for Indian democracy. Jewels of Indian leadership are present here. We are here to save democratic principles laid in the constitution.”

He said that in Arunachal Pradesh, democracy is going through its worst stage.

“Federal democracy has been facing crisis, even SC orders are not followed. Former CM of my State had to commit suicide. But the party in power in Arunachal does not want a CBI inquiry. The CBI has become a puppet in their hands,” said the former CM of Arunachal Pradesh.

“We all know how democratically-elected governments are being tortured by those sitting in power. It is a threat to the country’s democratic ethos,” he added.

“Mamataji I appreciate your effort. The regional parties should come together,” he added.

CM Banerjee invited Apang to speak as the 4th speaker in the rally.

Speaking at the rally, Mizo leader Lalduhawma criticised the Citizenship (Amendment) Bill saying it has alienated the people of Northeast.

“I want to give a warning to the Prime Minister that the Citizenship Bill should be withdrawn. If not India will not be a suitable place for people of the Northeast. I appeal to all regional parties of Northeast to cut all association with the BJP,” said Zoram Nationalist Party (ZNP) leader Lalduhawma.

“Only a new government can give relief to minorities. BJP and Bajrang Dal are dictating us what to eat and about our religion,” he said.