Amid controversies and protests over the issue of the coal mining in Dehing Patkai, the Coal India Limited (CIL) has ordered suspension of all mining operations of North Eastern Coalfields, Margherita.

An order has been issued on June 3 by the general manager of the North Eastern Coalfields, CIL at Margherita.

The decision on suspension of the mining operations has been approved by the competent authority, the general manager said.

“As per approval of competent authority, all mining operations of North Eastern Coalfields, Coal India Limited, Margherita are hereby temporarily suspended” with effect from June 3, 2020, said the order. 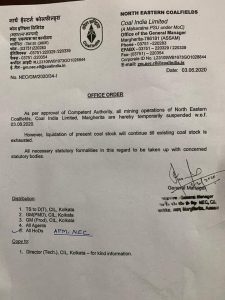 “However, liquidation of present coal stock will continue till existing coal stock is exhausted,” the order further said.

The official of Coal India Limited, a Maharatna PSU under the Coal Ministry, further said in the order: “All necessary statutory formalities in this regard to be taken up with concerned statutory bodies.”

The conservationists, wildlife activists and various other socio-political and student organisations are demanding that coal mining activities be stopped to save Dehing Patkai rainforest.

On Thursday, the Gauhati High Court also accepted PILs which sought a stay order on all mining operations in Dehing Patkai.

However, the Chief Justice’s Division Bench stayed away from passing any interim order and it directed both the Centre and state government to submit all documents relevant to the matter.